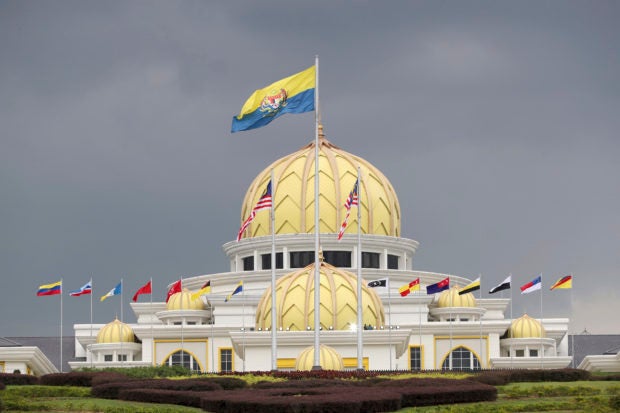 Flags fly at the Malaysia National Palace in Kuala Lumpur, Malaysia, Thursday, Jan. 24, 2019. King Sultan Muhammad V shocked the nation by announcing his abdication in January 2019, days after returning from two months of medical leave. The 49-year-old sultan from eastern Kelantan state only reigned for two years as Malaysia’s 15th king and didn’t give any reason for quitting. Sultan Abdullah Azlan Shah succeeded his ailing 88-year-old father on Jan. 15, in a move seen as paving the way for him to become the next king. (AP Photo/Vincent Thian)

Sultan Muhammad V, 49, resigned Jan. 6 as Malaysia’s 15th king, cutting short his five-year term in the first abdication in the nation’s history. No reason was given, but it came after he reportedly married a 25-year-old former Russian beauty queen in November.

The keeper of the ruler’s seal, Syed Danial Syed Ahmad, said the Conference of Rulers elected Sultan Abdullah on Thursday under a unique rotating monarchy system. Sultan Abdullah, a key figure in several international sports bodies, will be sworn in on Jan. 31 for a five-year term, Syed Danial said in a statement.

Sultan Abdullah’s election had been widely expected, as the Pahang ruler was next in line based on a rotation order established among the country’s nine state rulers.

Just days ago, Sultan Abdullah, 59, succeeded his ailing 88-year-old father, Sultan Ahmad Shah, as Pahang sultan. He has been state regent for the past two years due to his father’s ill health and the state succession was seen as paving the way for him to become king.

Nine ethnic Malay state rulers take turns serving as Malaysia’s king for five-year terms under the world’s only such system, which has been maintained since the country’s independence from Britain in 1957.

Known as the Yang Di-Pertuan Agong, or He Who is Made Lord, Malaysia’s king plays a largely ceremonial role, since administrative power is vested in the prime minister and Parliament. But the monarch is highly regarded as the guardian of Islam and Malay tradition, particularly among the ethnic Malay Muslim majority.

The king is the nominal head of the government and armed forces. All laws, Cabinet appointments and the dissolution of Parliament for general elections require his assent. The king also issues pardons for criminals. Malaysia’s Constitution allocates some 5 million ringgit ($1.21 million) a year for the expenses of the king and his household, including palace maintenance, although the sum can be increased with Cabinet approval./gsg