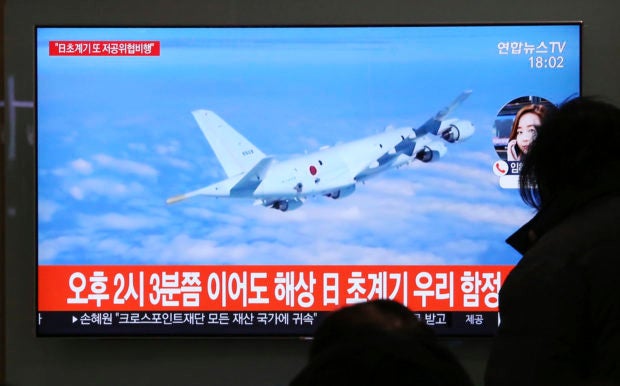 SEOUL, South Korea – South Korea’s military accused Japan of a “clear provocation” over what it said was a threatening low-altitude flight by a Japanese patrol plane over a South Korean warship on Wednesday.

Seoul’s Joint Chiefs of Staff said the plane flew 60 to 70 meters (196 to 229 feet) above the water near a South Korean naval ship in seas southwest of the Korean Peninsula.

Seoul and Tokyo are key U.S. allies and close economic partners, but are currently locked in disputes over military issues and wartime history.

The announcement comes after a weekslong spat between the countries’ militaries over Japanese allegations that a South Korean warship locked its fire-control radar on a Japanese patrol plane in December. South Korea’s military denied the allegation and accused the plane of flying low over the warship, which was engaged in a rescue operation of a North Korean fishing boat.

“The threatening low-altitude flight conducted today, despite our firm request to the Japanese government to ensure that (such flights) don’t recur, is a clear provocation against the naval vessel of a friendly country and makes it impossible for us not to question Japan’s intentions,” Suh said in a statement. “If such activity repeats again, our military will respond strongly based on our response rules.”

The disputes between the militaries have further strained relations between Seoul and Tokyo, which have sunk to their worst level in recent years over compensation issues related to the Japanese army’s sexual abuse of “comfort women” and forced labor by Koreans during Japan’s colonial rule of the Korean Peninsula from 1910 through 1945. / gsg