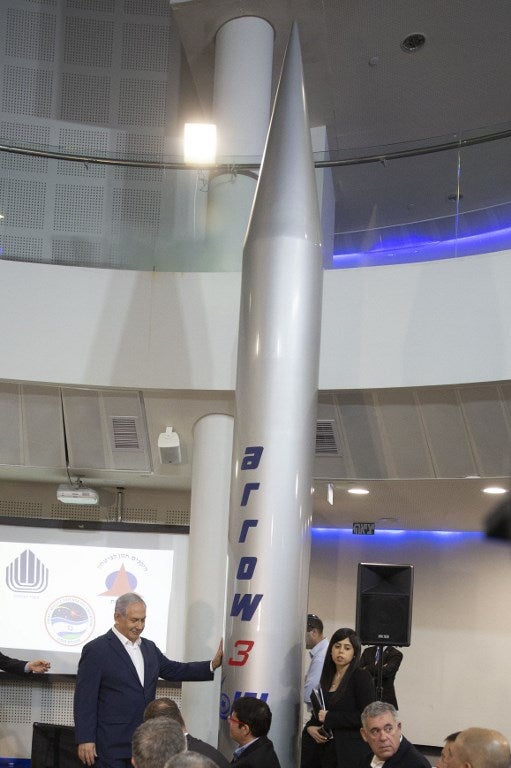 JERUSALEM — Israel said it carried out a successful test Tuesday with the United States of ballistic missile interceptors jointly developed by the allies, in the face of growing tensions with Iran.

The test came a day after the latest deadly exchange of fire between Israel and Iranian forces operating in Syria.

The Arrow 3 interceptor system, designed to shoot down missiles above the atmosphere, was deployed at air force bases across Israel two years ago.

“Our enemies who seek to destroy us should know that Israel’s clenched fist will reach all those who seek our ill and we will settle accounts with them,” Israeli Prime Minister Benjamin Netanyahu said in a statement hailing the test.

“We will continue to successfully develop the most advanced weapons systems in the world in order to ensure the security of the citizens of Israel and the State of Israel.”

On Tuesday Netanyahu toured the aerospace plant in central Israel where the Arrow missiles are produced.

The Arrow system, partly financed by the United States, was developed and produced by Israeli Aerospace Industries in partnership with Boeing.

An Israeli defense ministry statement said Tuesday that the system’s radars had detected the target, a replica missile launched from central Israel.

“At the right moment, the Arrow 3 interceptor was launched toward the target and successfully completed its mission,” it said.

Systems for intercepting incoming missiles at lower altitudes are either already deployed or close to becoming operational.

In December, Israel’s arch-enemy Iran confirmed it had carried out a missile test, after Western powers sharply criticized a launch of medium-range ballistic missiles.

Israel had opposed the deal between Iran and major powers, which lifted a wide range of international sanctions in exchange for limits on the Islamic republic’s nuclear program.

Iran reined in most of its nuclear program under the 2015 deal, but has continued to develop its ballistic missile technology.

“The success of this test is a major milestone in the operational capabilities of the State of Israel and its ability to defend itself against current and future threats in the region,” the Israeli defense ministry said Tuesday.

The system passed a series of tests before being deployed in 2017, and the ministry did not give further details on the purpose of Tuesday’s test.

Israel has vowed to prevent Iran from entrenching itself in neighboring Syria.

Israeli forces carried out a series of strikes in recent days on what it said were Iranian facilities in its war-torn neighbor, after a rocket was fired on Sunday at the Golan Heights.

Israel accused Iranian forces of firing the surface-to-surface rocket, which was intercepted by the Iron Dome system.  /cbb