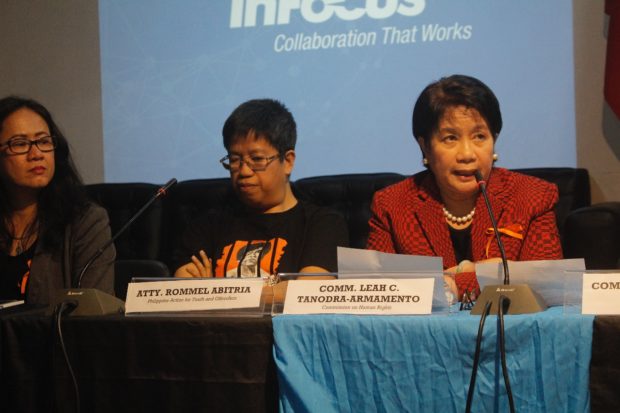 MANILA, Philippines — Lawmakers should check the real situation on the ground before passing a bill that would lower the age of criminal liability to nine years old, children’s rights advocates said on Tuesday.

Commission on Human Rights (CHR) Commissioner Leah Tanodra-Armamento said the bill — if enacted into law — would aggravate the situation of children who are already suffering inhumane conditions inside jails and reformation facilities.

“The Commission on Human Rights reminds our legislators of the realities on the ground, which will be worsened by the proposed bill lowering the minimum age of criminal responsibility (MACR). Everyone knows our jails are overly congested,” Tanodra-Armamento said in a press briefing inside CHR’s office in Quezon City.

She also said that it would be a horrendous situation both for the accosted children and the country’s jail officials.

“In fact, the subcommittee of the Prevention of Torture of the United Nations finds the Philippine detention facilities as torture by itself. So to lower the age to nine will be a nightmare not only to a child but also to the jail management,” she added.

On Monday, the House of Representatives’ justice committee approved the proposed measure which will amend R.A. 9344, which has been heavily scrutinized by no less than President Rodrigo Duterte.

The House leadership said the amendments are considered a priority bill because it forms part of Duterte’s legislative agenda. It is set for second reading when the House resumes its session on Tuesday afternoon.

Tanadro-Armamento, however, warned the measure would also place an additional burden on the judiciary.

“The justice system at present is just starting to put in place the mechanism for CICL (children in conflict with the law). So to amend that at this point is to demand so much from our over-worked justice sector,” she explained.

“The proposed amendment is not supported by scientific data. On the contrary, studies show that brains mature at age 26 or later. Are the brain of the kids that ripe for decision-making?” she said.

Gabriela party-list Rep. Arlene Brosas also refuted comparisons made between the Philippines and other countries with lower MACRs.

(Rep. Doy Leachon told us that in other countries there were six-, eleven- or ten-year-olds in jails. How many countries do that? And what is the condition in Singapore compared to the Philippines?)

“Ano ba ‘yong mga services na meron sila? Baka ‘yong realidad natin ang may problema dito tapos isa-subject natin sila (What kind of services do they have? Maybe, our realities here are problematic, and yet we are going to subject them to this)?” she added.

Majority of Senators have opposed lowering MACR to nine years old, although some said they would prefer to bring it down from 15 years old as mandated by R.A. 9344 or the Juvenile Justice and Welfare Act of 2006.

Despite the different views on the right age for MACR, lawyer Cristina Sevilla of the Philippine Alliance of Human Rights Advocates (PAHRA) claimed that such proposals are senseless.

Several personalities — elected officials, celebrities, and activists — have voiced their opposition to the proposal. Since the President assumed office in 2016, he has been adamant in bringing down MACR in the country, based on allegations that organized crime groups are using children, 15 years old and below, to promote illegal activities. /ee

READ: Duterte says he has no personal grudge against Pangilinan