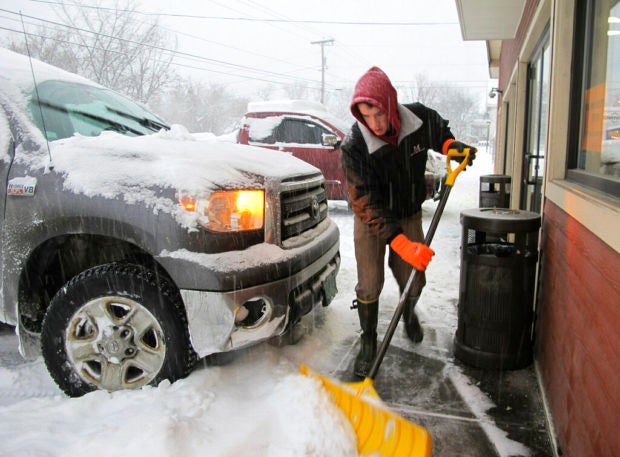 BOSTON — A winter storm that covered parts of the Midwest and Northeast in snow and sleet this weekend has manifested into a bitter freeze.

The National Weather Service says temperatures across the Great Lakes, Ohio Valley and Mid-Atlantic will drop 10 to 20 degrees below average Monday, with wind chills as low as minus 40 degrees Fahrenheit (minus 40 Celsius) hitting the Northeast.

A meteorologist with the National Weather Service called the wind chills “life-threatening” in upstate New York.

Amtrak says it expects to have all of its trains back on a full schedule Monday after a weekend of cancellations and delays caused by the winter storm as it rolled through the Midwest and Northeast.

Amtrak says travelers should continue to check on their train status on the Amtrak website or smartphone app before leaving for the station.

People should also be careful as they are getting on and off trains as platforms could still be slippery from ice.

More than 1,550 flights were canceled in and out of the U.S. as a major winter storm stymied travel across the country.

FlightAware, a flight tracking website, says nearly 1,500 flights were delayed Sunday in addition to the cancelations.

Boston Logan Airport was one of the hardest hit airports in the country. Just three flights were scheduled to depart from New Hampshire’s Manchester-Boston Regional Airport. All flights out of Burlington International Airport were canceled.

Other modes of transportation were also affected by the winter storm. Amtrak cancelled trains on the busy D.C. to Boston corridor, as well as from New York City to upstate New York, New York to Pennsylvania and elsewhere due to snow and slippery roads.

The winter storm is wreaking havoc on air travel as it moves across the US.

Logan International Airport in Boston was no exception with more than 250 flights canceled.

Xavi Ortega and his wife were stranded at the airport overnight after their Saturday evening flight to Barcelona, where they live, was canceled.

Ortega, a 32-year-old engineer, says the couple slept a bit and played Candy Crush to pass the time. They were unsure of when they might be getting home.

Some travelers were more fortunate.

Christine Cocca’s flight from Boston to Jakarta, Indonesia had not been delayed or canceled. While the bus she normally takes from Providence, Rhode Island to Boston was canceled, she was able to catch a ride to the airport from a relative.

New York City and the metro region have escaped any significant snowfall, with the precipitation coming down mainly as rain.

Meteorologists around the state were concerned about the upcoming severe cold from Sunday night into Monday, with expected wind chills in the teens in the New York City area and even down to well below zero around Albany.

The storm is bringing some of the coldest temperatures of the season. /ee