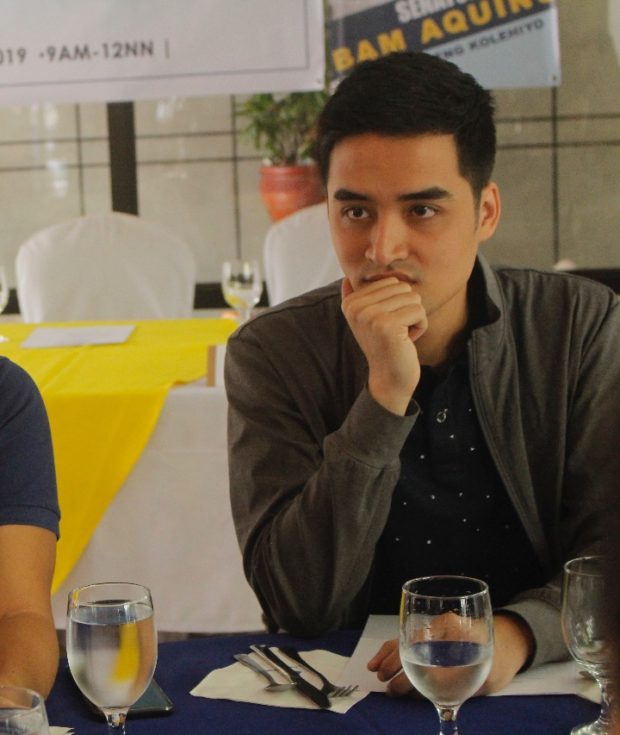 MANILA, Philippines — Months before the local elections, Pasig City Councilor and mayoralty candidate Vico Sotto claimed that residents in the city are looking for change in the way the city is governed.

Sotto, who was present during the mass oath-taking of new Aksyon Demokratiko members in San Juan on Monday, said people in Pasig villages want a new phase in the city’s government.

(Twenty-seven years in Pasig City, 4 mayors, one surname. I believe that it is time for a change in our city. If you get a chance to visit our villages, there are many crying for change.)

([The clamor] is not for change in faces or names, but a change in the system. That is going to be our message in the campaign.)

He admitted though that it would be hard to topple a formidable foe in incumbent Pasig Mayor Robert “Bobby” Eusebio.

“Of course it would be difficult, we understand that. Our opponents — they have the same last names for mayor and congressman. They are brothers,” he said.

Sotto is the child of television host and comedian Vic Sotto and actress and host Connie Reyes. In case the younger Sotto wins in the upcoming polls, he will be Pasig’s first local executive with a surname other than Eusebio in almost three decades.

In 1992, Vicente “Enteng” Eusebio — the family’s patriarch — was elected as the city’s mayor. When his nine-year term ended in 2001, he was succeeded by his wife, Soledad Cruz-Eusebio. Vicente again ran in 2004 while Robert ran in 2007 and served as mayor until 2013.

Robert was replaced by his wife, Maribel Andaya-Eusebio, who held office until her first term expired on 2016.

Sotto said that he and his party-mate, former Rep. Roman Romulo, who is gunning for the congressional seat in Pasig, have opted to pick a few candidates as councilors.

“We decided to run as a team […] we don’t have any official candidate for vice-mayor, our incumbent (Vice Mayor Iyo Christian Bernardo) is already running for his third term and we’re in very good terms,” he explained.

“For councilor, we also decided not to come up with a full slate for the simple reason that we are confident that we can work with anyone, whoever wins. We want to focus on the two positions that can really make a difference in the city,” he added. /ee