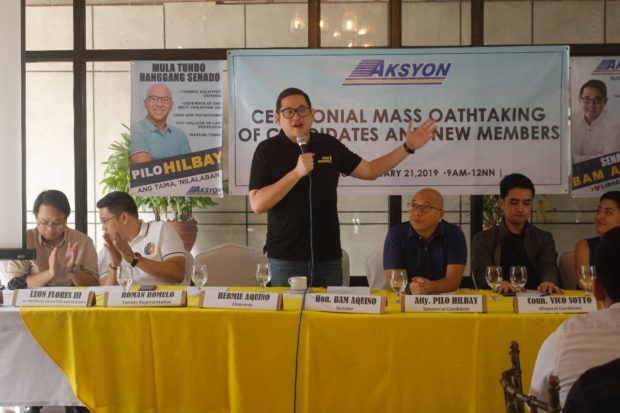 Senator Bam Aquino, one of the nominees of Aksyon Demokratiko, speaks at the oathtaking. GABRIEL PABICO LALU

MANILA, Philippines — Senatorial candidates from different groups such as Otso Diretso and Nationalist People’s Coalition (NPC) were endorsed by Aksyon Demokratiko on Monday.

They will be joined by Nationalist People’s Coalition (NPC) senatorial bet former Senator Lito Lapid, who is also part of Aksyon’s official candidates.

Party-list group Luntiang Pilipinas, led by its first nominee Mike Ubac, and Wow Pilipinas nominee Robin Garcia were also presented during the event, where Hilbay and more than 50 local candidates took their oaths as members of Aksyon. 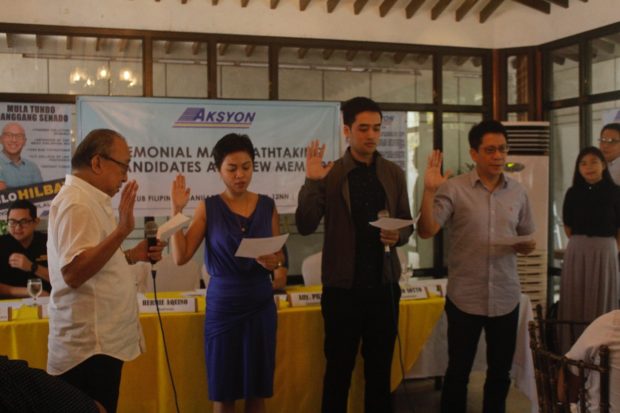 Candidates for the 2019 elections being endorsed by Aksyon Demokratiko. GABRIEL PABICO LALU

Aksyon Demokratiko, which was founded by late former presidential candidate and Senator Raul Roco in 1997, looks to advocate “honest governance and equal opportunity for all”. /je