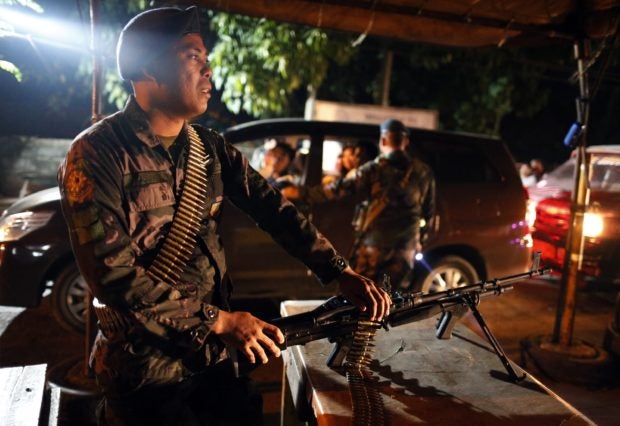 POLL WATCHER Soldiers implement tight security measures in Cotabato City on Sunday, the eve of the plebiscite to ratify the Bangsamoro Organic Law, the charter of the proposed Bangsamoro Autonomous Region in Muslim Mindanao. —JEOFFREY MAITEM

About 2.2 million registered voters will cast ballots at 7,141 clustered precincts in 1,228 polling centers in the plebiscite areas.

President Rodrigo Duterte is optimistic that the BOL will be ratified, Cabinet Secretary Karlo Nograles said on Sunday.

The President joined the campaign for ratification last week, calling on the people of Mindanao to vote for the BOL to put an end to the decadeslong conflict on the island that had taken more than 120,000 lives.

The plebiscite is being held in the provinces that make up the ARMM—Basilan, Lanao del Sur, Maguindanao, Sulu and Tawi-Tawi—and in the cities of Cotabato and Isabela.

A second vote will be held on Feb. 6 in Lanao del Norte (except Iligan City) and six towns in Cotabato that may want to join the BARMM.

But if the majority of Monday’s voters decided not to ratify the BOL, Jimenez said there might be no need to hold the Feb. 6 vote.

The vote is not computerized, Jimenez said.

Voters write their answers on the ballots by hand, and the votes will be counted also by hand, he said.

The results will be known in four days, Jimenez added.

Voters in the ARMM are being asked to answer only one question—whether they want the BOL ratified.

Those in Basilan are being asked two questions: whether they favor ratification of the BOL and whether they want Isabela City to become part of the BARMM.

Voters in Isabela are being asked only whether they want their city to be part of the BARMM.

Voters in Cotabato City are being asked to answer only the question about inclusion.

The questions are written in Filipino, with Arabic translation in areas where Arabic is generally spoken.

The only acceptable answers are yes and no and their equivalents in the local dialects, Jimenez said.

No identification cards are required of voters, as the voter lists are specific and verified, Jimenez said.

The vote count begins immediately after the polls close, he said.

The full Comelec will serve as the national board of canvassers and the canvassing will be done in Manila, from where the results will be proclaimed, he added.

The military and the police have deployed thousands of forces to the plebiscite areas to secure the vote. 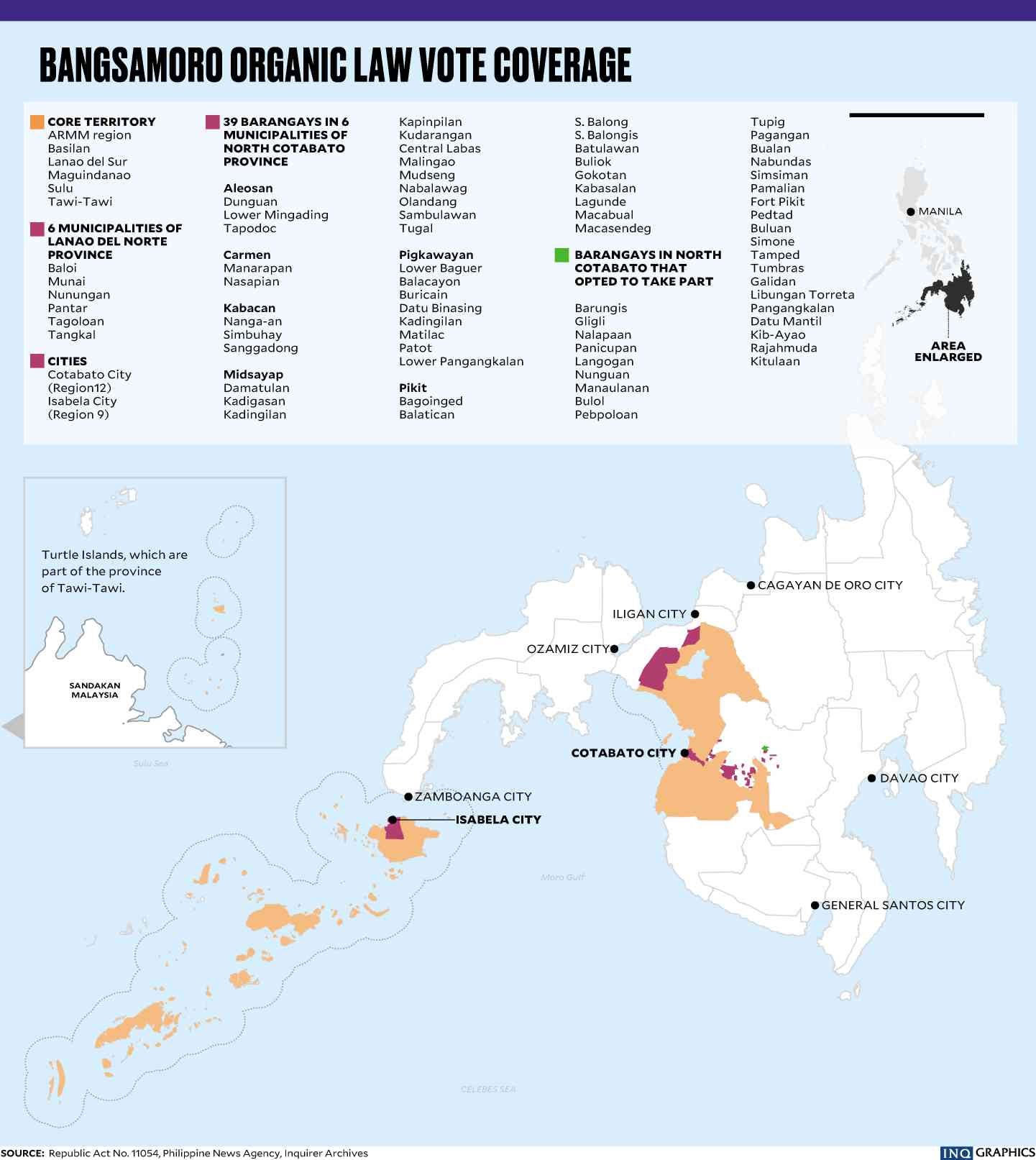 In the ARMM alone, 20,000 soldiers and policemen are watching the polling places.

Maj. Arvin Encinas, spokesperson for the 6th Infantry Division, on Sunday called for public vigilance amid reports that saboteurs, including the Bangsamoro Islamic Freedom Fighters, might try to disrupt the plebiscite.

Cardinal Orlando Quevedo, the archbishop of Cotabato, also appealed for vigilance and dismissed information that religious organizations in Cotabato City, including his congregation, the Oblates of Mary Immaculate, opposed ratification of the BOL.

Quevedo urged voters to go out and vote. He predicted that the BOL would be ratified.

“My fearless forecast is that the yes votes will win overwhelmingly, even in Cotabato City,” Quevedo said on Sunday.

The Moro Consensus Group also predicts a victory for the BOL.

“I have no doubt yes will have the supermajority of the Bangsamoro voters, including non-Moros. Many people now understand that the only way to move forward is to take the path of peace,” the group’s leader, Drieza Lininding, said on Sunday.

Sen. Risa Hontiveros appealed to those opposed to the BOL to “exercise their right to dissent responsibly” at the polls.

“Let us maintain our respect for Mindanao, our democratic institutions and one another despite our differences,” Hontiveros said in a statement on Sunday.