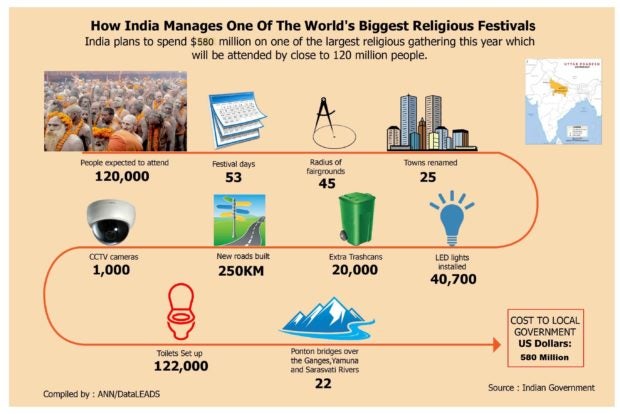 NEW DELHI — The world’s largest religious festival is on-going in northern India’s most populous states Uttar Pradesh. The fair is popularly known as Kumbh Mela. It is a mass Hindu pilgrimage of faith in which millions of Hindus gather to bathe in a sacred river. The mass ritual bathing is held every 12 years in Prayagraj formerly known as Allahabad where the mythological river Saraswati is believed to merge with the sacred rivers Ganga and Yamuna. Bathing at the holy confluence of these rivers is thought to cleanse a person of all their sins.

The town was renamed from Allahabad to Prayagraj in October 2017 to give it a more Hindu religion connotation.  In addition, names of 25 twons were changed.

The festival is considered the largest peaceful gathering in the world which UNESCO added to its list of intangible human heritage in 2017. For the 2019 Kumbh at Prayagraj, 120 million pilgrims will be coming together for the holy dip during the 55 day festival run. This year, the Uttar Pradesh government has allocated $580 million. The preparations also include 122,000 temporary toilets and 800 special trains, 1000 CCTV cameras and a range of accommodation to help the visitors.

A disease surveillance unit would come up at Kumbh Mela and Indian Railways will use Artificial Intelligence for crowd control at the stations. Disaster management facilities with dedicated team of doctors & paramedical staffs have been appointed and the police department has established 15 high-tech Lost and Found registration centres to help find devotees as they go missing in large crowd.

The funds have been used to widen roads, construct a temporary city with free tents and and 40 watch towers have been installed in the vicinity of Kumbh Mela to closely monitor crowd. There are luxurious tents as well being offered by private companies for more affluent pilgrims.

An app has been developed by the Uttar Pradesh Police and it will guide you to everything you need. What’s more, the posters of Prime Minister Modi and Chief Minister Yogi Adityanath welcome you on their website, social media accounts and throughout the fair grounds.