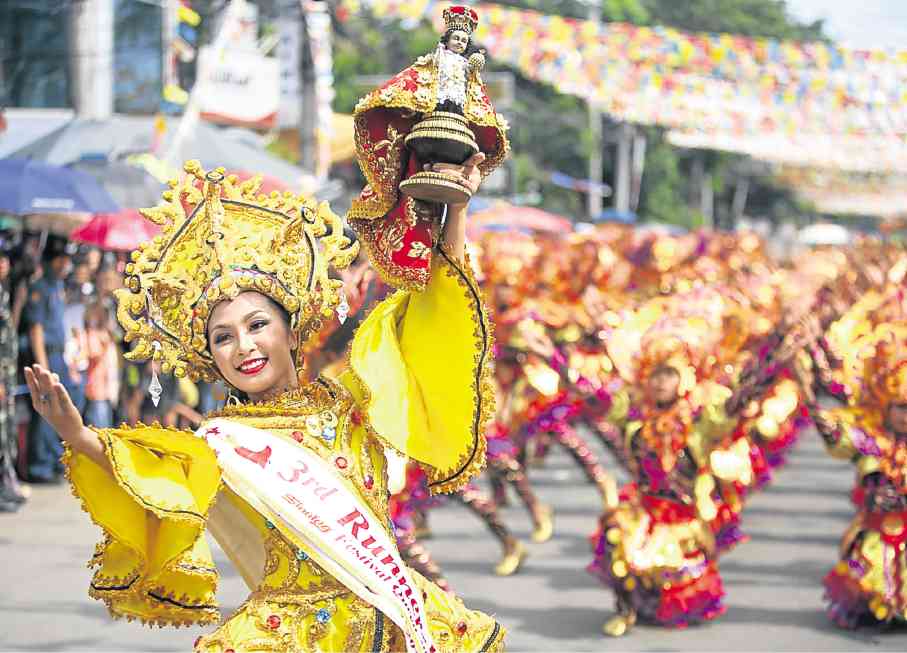 The Sinulog is all about Cebu province’s most revered religious icon, the Sto. Niño, represented by a replica being held by a participant in a dance competition in Cebu City. LITO TECSON/CEBU DAILY NEWS

CEBU CITY — You are not alone.

This was the message conveyed by Cebu Archbishop Jose Palma as Cebuanos celebrated the feast of the Sto. Niño de Cebu on Sunday.

Amid obstacles and problems, the 68-year-old prelate reminded the people to never lose hope and put their trust in God.

“Before, we were a lost people. We were pagans until the Sto. Niño came in 1521. It is the Sto. Niño who found us and showed us His love,” said Palma in his homily during the 6 a.m. Pontifical Mass at the jam-packed Basilica Minore del Sto. Niño’s Pilgrim Center.

“We are not worthy and yet God made us His children and members of his family. Thanks be to God. We are loved by Him,” he added.

This year’s celebration carries the theme “Sto. Nino: Guide of God’s Children to Service and Humility,” which is patterned after the pastoral thrust of the Catholic Bishops’ Conference of the Philippines (CBCP) on the Year of the Youth.

In 2013, the CBCP launched a nine-year “spiritual journey towards the 500th anniversary of the Christianization of the Philippines in 2021 with different themes for each year.

Palma expressed hope that Pope Francis would again visit the country, particularly Cebu, in 2021 to celebrate a milestone in the history of Catholicism in the Philippines.

He said an invitation was already sent to the Holy Father.

“Let us pray that the pope will come here,” Palma said.

During the offertory, people waved their hands in the air as they sang “Bato-Balani sa Gugma (Magnet of Love),” an ancient Cebuano hymn in honor of the Sto. Niño.

Despite a prohibition, some people — most of whom were staying outside the basilica — managed to release balloons with rolled pieces of paper containing prayer petitions.

Since the basilica’s courtyard was packed, devotees spilled over to the streets.

They watched the Eucharistic celebration on large LED screens installed around the basilica. After the Mass, Palma and the bishops led the faithful in dancing the traditional Sinulog at the Pilgrim Center.

Nine other Masses were held to celebrate the feast of the Sto. Niño on Sunday.

Several people also lined up to kiss and venerate the original image of the Sto. Niño de Cebu housed inside a bullet-proof glass case inside the centuries-old church. /cbb