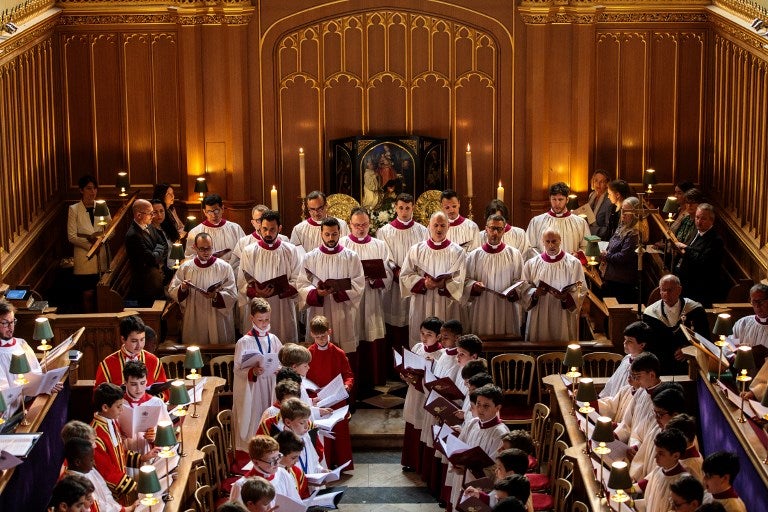 The Sistine Chapel choir perform with the Choir of Her Majesty’s Chapel Royal during an Evensong service at the Chapel Royal, St James’ Palace in London on May 24, 2018, in London, England. The Capella Musicale Pontificia (CMP), also known as the Sistine Chapel Choir, is The Pope’s official choir and the oldest existing choir in the world. AFP

VATICAN CITY — Pope Francis has put a close aide in charge of the Sistine Chapel Choir following a funding scandal.

The Vatican said Saturday that the all-male ensemble, believed to be the world’s oldest choir, is now being led by Monsignor Guido Marini, who assists Francis during church ceremonies. Francis named another monsignor, Guido Pozzo, to handle the choir’s finances.

The Vatican last year began a probe of alleged diversion of funds by choir directors. The Holy See’s press office said Saturday that the investigation is continuing into the “economic-administrative aspects” of the choir, and that it would release information about it when it is done.

Meanwhile, the choir’s director continues at his post, now answering directly to Marini, who will oversee all aspects of the choir, including its musical activity, the Vatican said.

The choir’s much-heralded 2018 summer tour of the United States was canceled without official explanation.

In May, the choir performed for celebrities at the New York Metropolitan Museum of Art’s annual VIP-studded Gala.

Francis noted in his apostolic letter announcing the changes that church choirs must perform at liturgical ceremonies with “sincere piety.” /cbb