Help! From ‘Barangay Beatles,’ a cry for justice 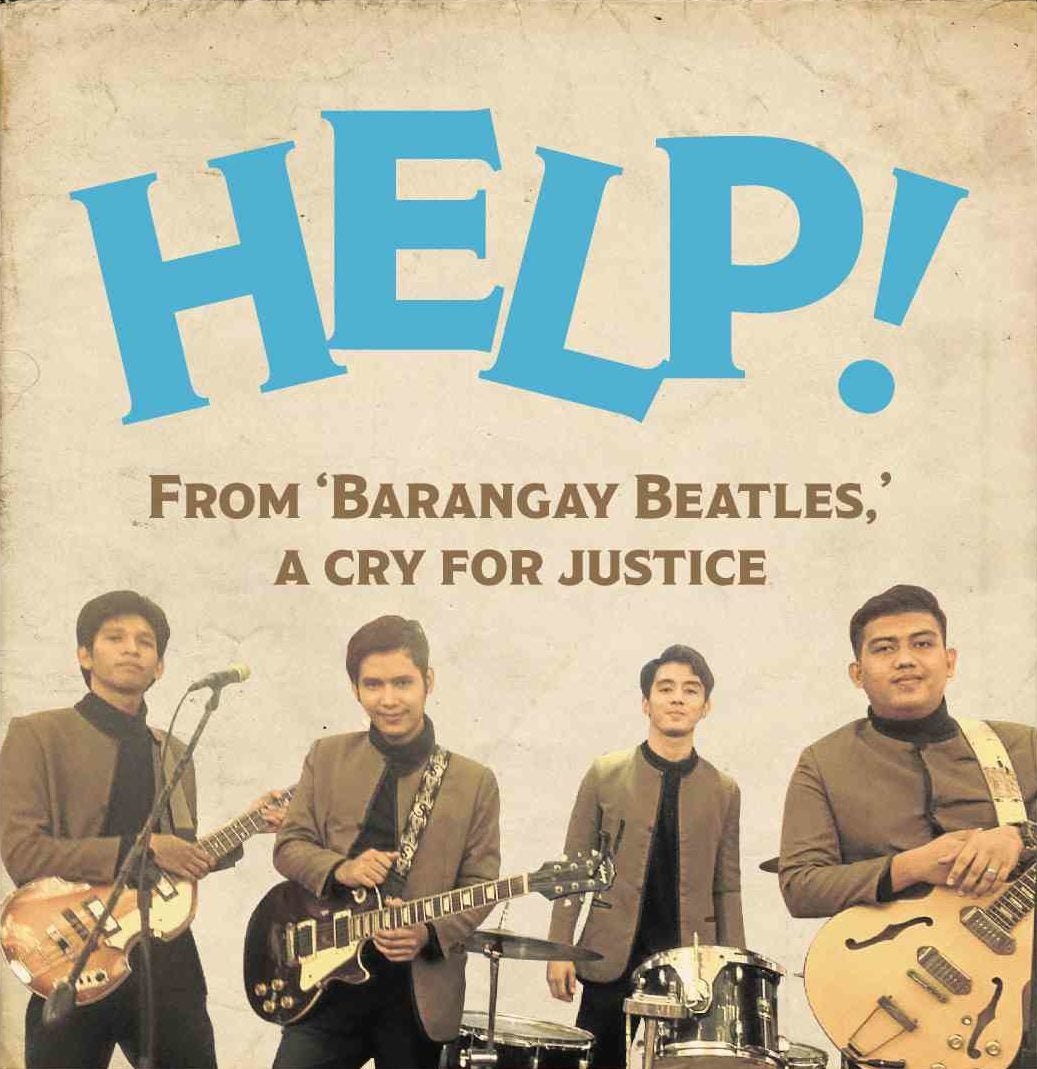 Ten thousand kilometers from Liverpool, England, where the Beatles band was formed in 1960, four young men are resurrecting the dreams and music of the Fab Four in a gritty district in Manila.

“That’s where our music studio used to stand,” said Jayphee Salas, 22, pointing to a pile of rubble — where concrete walls once stood — in a narrow alley in Barangay Beatles, officially known as Barangay 330, in Sta. Cruz, Manila.

Adjacent to the former studio where Salas and his friends used to practice and record covers from the Beatles’ discography is a row of murals featuring the band’s album covers — from “The White Album” to “Sgt. Pepper’s Lonely Hearts Club Band,” “Magical Mystery Tour” and “Yellow Submarine.”

The studio was demolished and converted into a parking lot in October, just a month after the barangay chair, Angel “Che Joy” Rivero, was shot dead by still unidentified gunmen.

Police said Rivero had just left an anti-illegal drug seminar in the community around 2 p.m. on Sept. 15, 2018, when two men on a motorcycle shot him at close range. Rivero, 53, died on the spot.

Rivero’s wife Regine said investigators have yet to provide new leads about her husband’s killers, but vowed to continue fighting for justice until his killers are identified.

Rivero was the resident music guru and mentor of Salas’ group, and his love for music could still be felt in the green tents, food stalls, plant boxes and trash cans dotting the barangay and bearing the name of his favorite band.

But Rivero’s greatest legacy is the group of budding musicians he formed in 2015, the Brgy. Beatles Tribute Band, composed of young students who used to cut  classes to jam on the streets of Tondo.

Salas and his bandmates — Raffy Mendiola, 21; James Andrew Billate, 21; Alvic Vergara, 28, and keyboardist Jolo Valdivia — credit Rivero for making them appreciate the power of music to cut across generations and social classes.

“He was our songbook. When he left and the studio was gone, it feels like a lot had been taken away,” Mendiola said.

According to the group, Rivero, a musician himself,  guided a lot of musically inclined youth in the community and provided them music instruments as a way of diverting them from the usual vices of youth.

“We were in high school when we started playing together with acoustic songs like ‘Till There Was You’ and ‘I Will.’ But we didn’t have the right instruments or the proper guidance back then,” recalled Salas.

In 2015, Rivero saw them play the songs of The Beatles in the music studio and set up his instruments to play ‘Drive My Car’ with them. “He then asked us to come back to the studio the next day and so we did, every night. That’s when he decided to form the group,” Mendiola said.

Rivero gave them direction in life, not to mention provided them instruments and uniforms, the group said, which helped them summon the confidence to perform on live stage.

On Oct. 9, 2016, the Brgy. Beatles Tribute Band had their first paid live concert in the barangay, with die-hard Beatles fans and people from neighboring villages watching them perform.

Since then, the band has been performing regularly in the community and playing gigs around Manila.

Their repertoire may sound ancient to a lot of millennials, but the band recalled growing up with the music of The Beatles, thanks to grandfathers and uncles who were infected with Beatlemania in the mid ’60s. 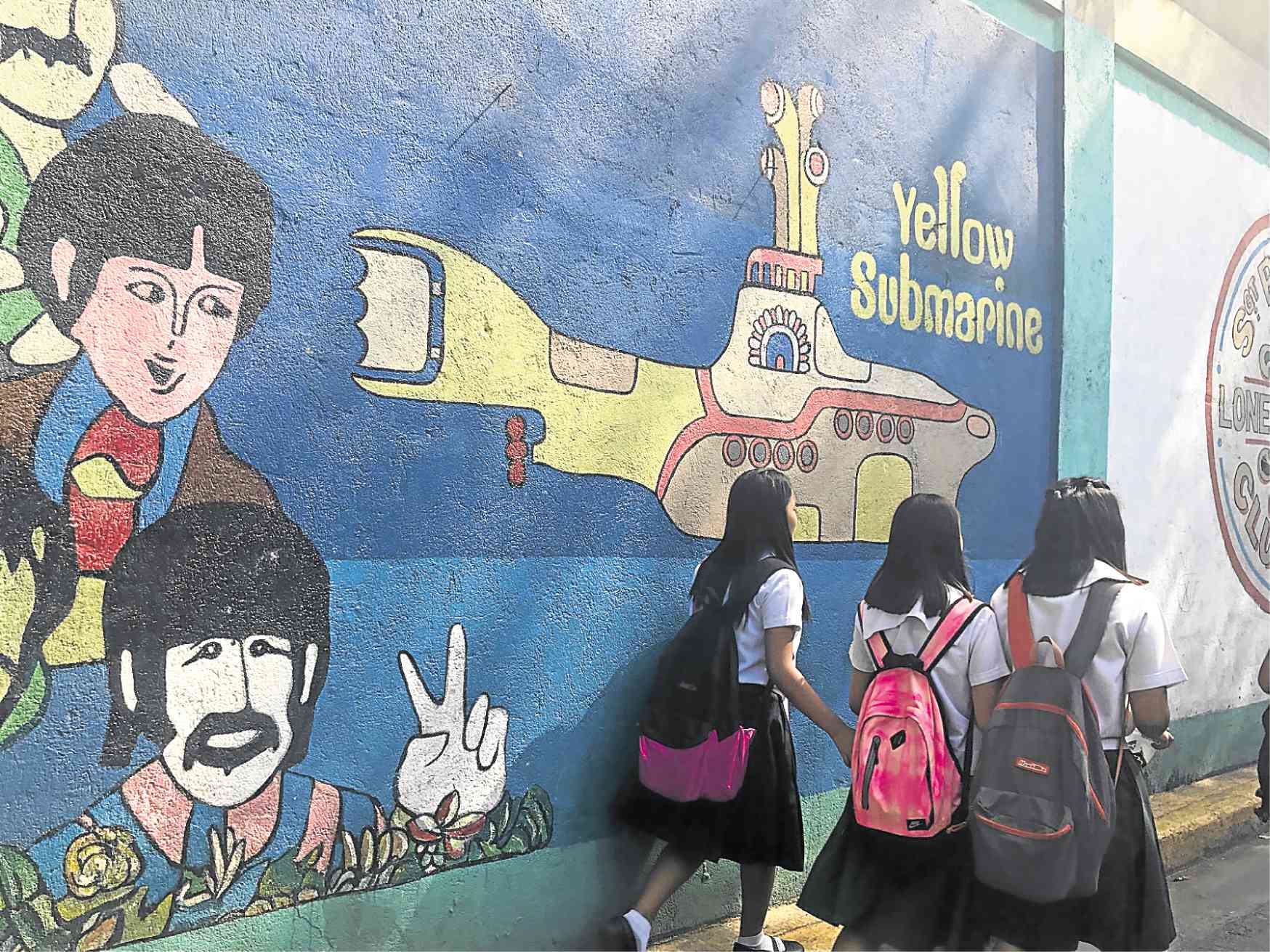 Salas sees their own story as being similar to that of the Beatles: “We started from nothing. We were young, from a small community, and couldn’t afford to buy our own instruments. But just like The Beatles, we strived not to become musicians who play well, but musicians who feel what we’re playing.”

Things may have changed since Rivero’s death, but the young band remains committed to keeping his spirit alive in the community through the music he helped nurture.

Like his unsolved murder, Rivero had unfinished business at Barangay Beatles.  The large mural of the Sgt. Pepper’s Lonely Hearts Club Band’s album cover still has to be completed, with the faces remaining blank.

“He wanted to paint our own faces there, but it was not to be,” Salas said.

These days, one of the band’s favorite Beatles song, “In My Life” has become a fitting metaphor to the waves of change and loss that they’ve had to endure: “There are places I’ll remember/All my life, though some have changed/Some forever, not for better/Some have gone and some remain…”