One in three Christians in Asia faces persecution – report 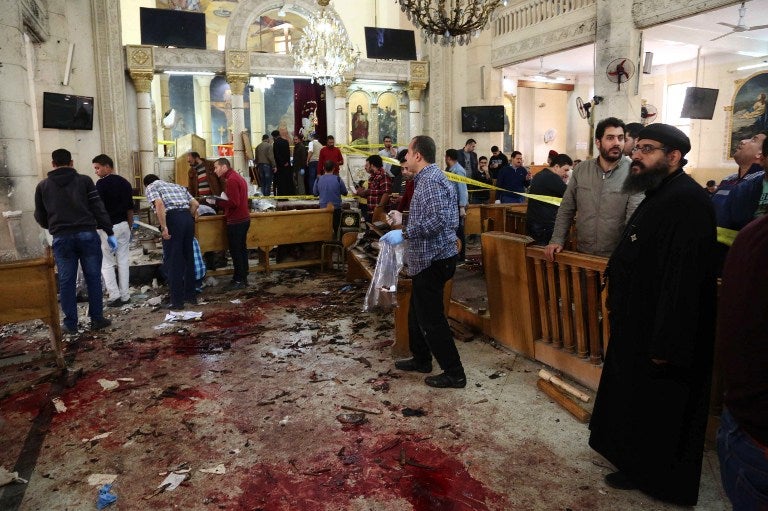 People look at the aftermath of a bomb blast that struck worshippers gathering to celebrate Palm Sunday at a Christian church in Egypt. One in three Christians in Asia faces high levels of persecution after a “shocking increase” of religious-based threats and violence across the world, a global advocacy group said Wednesday, Jan. 16, 2019.  AFP FILE

PARIS, France – One in three Christians in Asia faces high levels of persecution after a “shocking increase” of religious-based threats and violence across the world, particularly in China and sub-Saharan Africa, a global advocacy group said Wednesday.

Around half of China’s 100 million Christians encounters persecution, “the worst it’s been in more than a decade”, following “new laws seeking to control religious expression”, the Open Doors watchdog said.

Persecution worldwide increased for the sixth straight year, with a total of 245 million Christians — one out of nine worldwide — facing high levels in 2018, up from 215 million, or one in 12, the previous year.

More than 4,300 Christians were killed due to their beliefs worldwide last year, over 3,700 of them in Nigeria, according to the 2019 World Watch List.

The number of deaths in Nigeria almost doubled, with attacks from the jihadist Boko Haram group and ethnic Fulani herders posing a “double threat” for Christians, the NGO said.

North Korea topped the NGO’s “extreme persecution” ranking of 50 countries, as it has since 2002.

Open Doors said there were signs religious repression there was getting worse, but it was difficult to obtain data in the country, where “Christianity is forbidden and is a political crime”.

India entered the top 10 for the first time, Open Doors said, as “Hindu extremists act with impunity and violent attacks on Christians and churches rise”.

“For many Christians in India, daily life is now full of fear -– totally different from just four or five years ago,” said Blyth.

Open Doors, a non-denominational mission supporting persecuted Christians, warned that the rate of discrimination and violence was likely worse than it has reported, as it only records deaths proven to be to be motivated by religion. /cbb