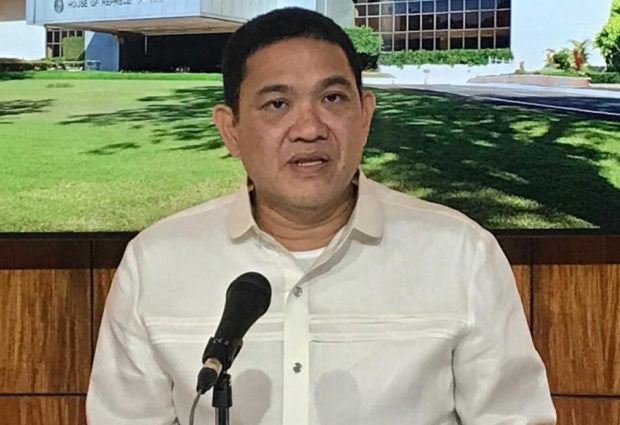 Majority Floor Leader Rolando Andaya Jr. during a press briefing at the House of Representatives on January 16, 2019. Photo by Noy Morcoso / Inquirer.net

MANILA, Philippines — House Majority Leader Rolando Andaya Jr. has accused the Department of Budget and Management (DBM) of illegally bidding out last year around P198-billion worth of government contracts, including big-ticket infrastructure projects that form part of the “Build, Build, Build Program.”

At an inquiry on Tuesday, Bingle Gutierrez, executive director of the DBM’s Procurement Service (DBM-PS), told congressmen that several Executive departments and government-owned and controlled corporations (GOCCs) have allowed her office to conduct the bidding for big-ticket infrastructure projects and other government contracts since 2017.

These projects and contracts, Andaya said on Wednesday, included the building of airports, railways, and mass transport systems, as well as the purchase of military hardware like helicopters. He added that he would provide details proving this on Thursday.

“The DBM has become some sort of a one-stop megamall of government projects for contractors,” the Camarines Sur congressman said in a statement. “Now, it has morphed into a super body responsible for the bidding of multi-billion government contracts.”

The lawmaker noted that the DBM-PS is only mandated by law to “procure commonly used supplies for the government such as envelopes, folders, ball pens, pencils, inks, computers and other office equipment that are cheaper to buy by the bulk.”

Gutierrez had cited Republic Act No. 9184 or the Government Procurement Reform Act (GPRA) as the DBM’s basis for conducting bidding for other department’s big-ticket projects, but Andaya said the law does not say anything about the office’s mandate.

Budget Sec. Benjamin Diokno should explain this to the Senate and the House of Representatives, the House Majority Leader said.

“The Congress has given the DBM-Procurement Service a P7-billion budget in 2018 for the procurement of commonly-used supplies. We have not given them the authority to conduct bidding for big-ticket government projects, the budget of which were lodged in other departments outside DBM,” he added.

The DBM-PS was created on October 18, 1978, through Letter of Instruction No. 755 with the following functions, among others:

The Andaya-led House rules panel has launched its probe into alleged “budget anomalies” in the DBM, which Diokno has repeatedly denied. The probe came shortly after Senator Panfilo Lacson alleged that Speaker Gloria Macapagal-Arroyo got P2.4 billion in “pork barrel” funds while the Camarines Sur congressman got P1.9 billion. Both denied this. /jpv