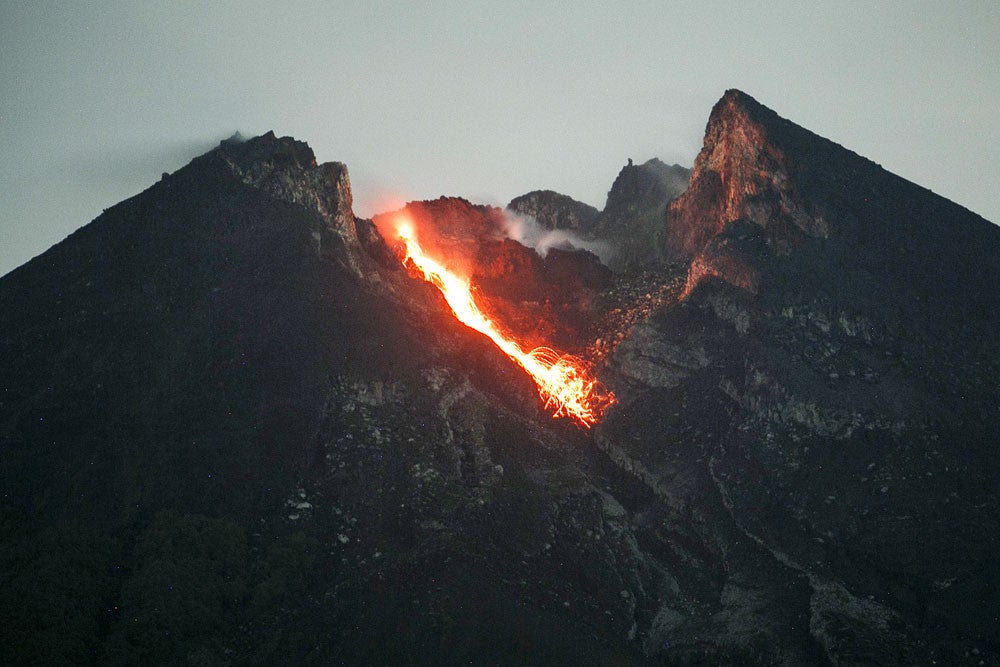 Incandescent lava flows from Mount Merapi’s crater on Tuesday as seen from Klangon Hill in Sleman regency, Yogyakarta. The volcano has expelled 439,000 cubic meters of lava at a rate of 3,400 cubic meters per day since Jan. 10, according to the Yogyakarta office of the Center of Volcanology and Geological Hazard Agency. The Jakarta Post

KLATEN, Indonesia — Mount Merapi, which stands on the border between Yogyakarta and Central Java, has shown heightened volcanic activity over the past few days, spewing incandescent lava from its crater.

“The people are still calm because the lava so far has flowed only 500 meters to 800 meters down the slope. But we remain alert, in case Merapi erupts [suddenly],” he said on Tuesday.

Dimas Joko, a volunteer monitoring Mt. Merapi, said that the volume and the extent of the lava flow were both relatively normal, but that the volunteer team had banned all human activity within a 3-kilometer radius from the crater.

“They may [still] harvest grass or farm, but they are not allowed within a radius of three kilometers from the crater,” he said.

Citing recommendations from the Center of Volcanology and Geological Hazard Mitigation (PVMBG), Joko said that people were advised to stay away from the upper slopes of the mountain for their own safety, especially considering the lava flow.

Mt. Merapi’s warning status on Tuesday was still Waspada (Caution), the second of the four-tiered national volcano alert system that has been in place since May 2018.

The Central Java Disaster Mitigation Agency (BPBD Central Java) is working with other regencies to prepare evacuation routes and emergency shelters in anticipation of a major eruption.

“Restoring the evacuation routes is very urgent, especially in Klaten. The routes are needed to evacuate people when Merapi’s alert level reaches Awas [Danger],”  he said.

Sarwa said the most heavily damaged evacuation routes in Klaten included the routes in Kemalang, Manisrenggo and Karangnongko districts. The agency had proposed a budget of Rp 100 billion (US$7 million) to repair the routes.

“I heard that the fund had already been disbursed. Hopefully, construction can begin soon,” he said.

“[The calculations] are necessary for smoother mitigation [efforts] at the time of a disaster,” he said. BPBD Central Java had also installed three additional CCTV cameras in Klaten, Magelang and Boyolali to monitor the volcano.

One of the world’s most active volcanoes, Mt. Merapi is located at the point where four regencies meet: the Central Java regencies of Magelang, Boyolali and Klaten, and Sleman regency in Yogyakarta. At least 353 people were killed and more than 350,000 others were displaced in the 2010 eruption. Most of the victims lived on the volcano’s slopes.