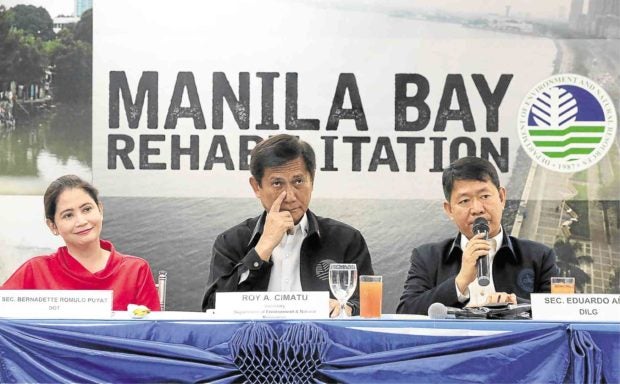 Commercial establishments along Manila Bay face closure or hefty fines if they continue to ignore laws on waste water treatment and other environment-friendly practices, officials warned less than two weeks before the launch of a P42-billion effort to revive the bay from decades of pollution and urban blight.

Secretary Roy Cimatu of the Department of Environment and Natural Resources (DENR) on Tuesday addressed the warning to hotels, restaurants and similar establishments located along the coast line.

On Jan. 27, a DENR-led task force will kickstart the massive cleanup and rehabilitation program by releasing an initial list of establishments that will receive “notices of violation” of environmental laws particularly on water and solid waste management, he said.

Closure plus fines per day

“We will examine wastewater discharge [from the establishments] and show them the results. The procedure will be to speak with them and inform them of the requirements, such as the treatment plant,” Cimatu said at a press briefing. “They have to comply or else we will shut them down.”

Aside from closure, violators face fines ranging from P20,000 to P200,000 for every day of violation, beginning on the date the water sample was taken, he said.

A draft executive order for the “Manila Bay Action Plan,” which is estimated to cost P42 billion, has been submitted for President Rodrigo Duterte’s signature, Cimatu added.

Environment Undersecretary Benny Antiporda said the department had already taken water samples from or checked the compliance level of close to 300 establishments.

With the rehab effort not limited to the Metro Manila section of the bay, and with thousands of informal settlers adding to the pollution not just on the coastline but also in the estuaries leading to it, the DENR-led interagency task force is facing a gargantuan task.

Last week, the DENR inspected the local government-run Manila Zoo and found that it had been discharging untreated sewage directly through one of the esteros flowing into the bay.

Cimatu then ordered the 59-year-old zoo to immediately construct its own sewage treatment plant, with the city later expressing willingness to build two more of such facilities.

At the same press briefing on Tuesday, Tourism Secretary Bernadette Romulo-Puyat and her agency would be meeting with hotel and entertainment spot owners who stand to be affected by the rehab.

“We will be following the ‘Boracay formula,’” Puyat said, referring to last year’s cleanup effort that required the closure of the famous resort island to tourists for months. “Until there is compliance from DENR and Department of the Interior and Local Government, these establishments would also not receive accreditation from DOT.”

Results of latest water test on Manila Bay showed that its fecal coliform level stood at 330 million most probable number (MPN) for every 100 milliliters, way off the acceptable level of 100 MPN.

Boracay’s waters, when tested prior to the shutdown, was at 1 million MPN.