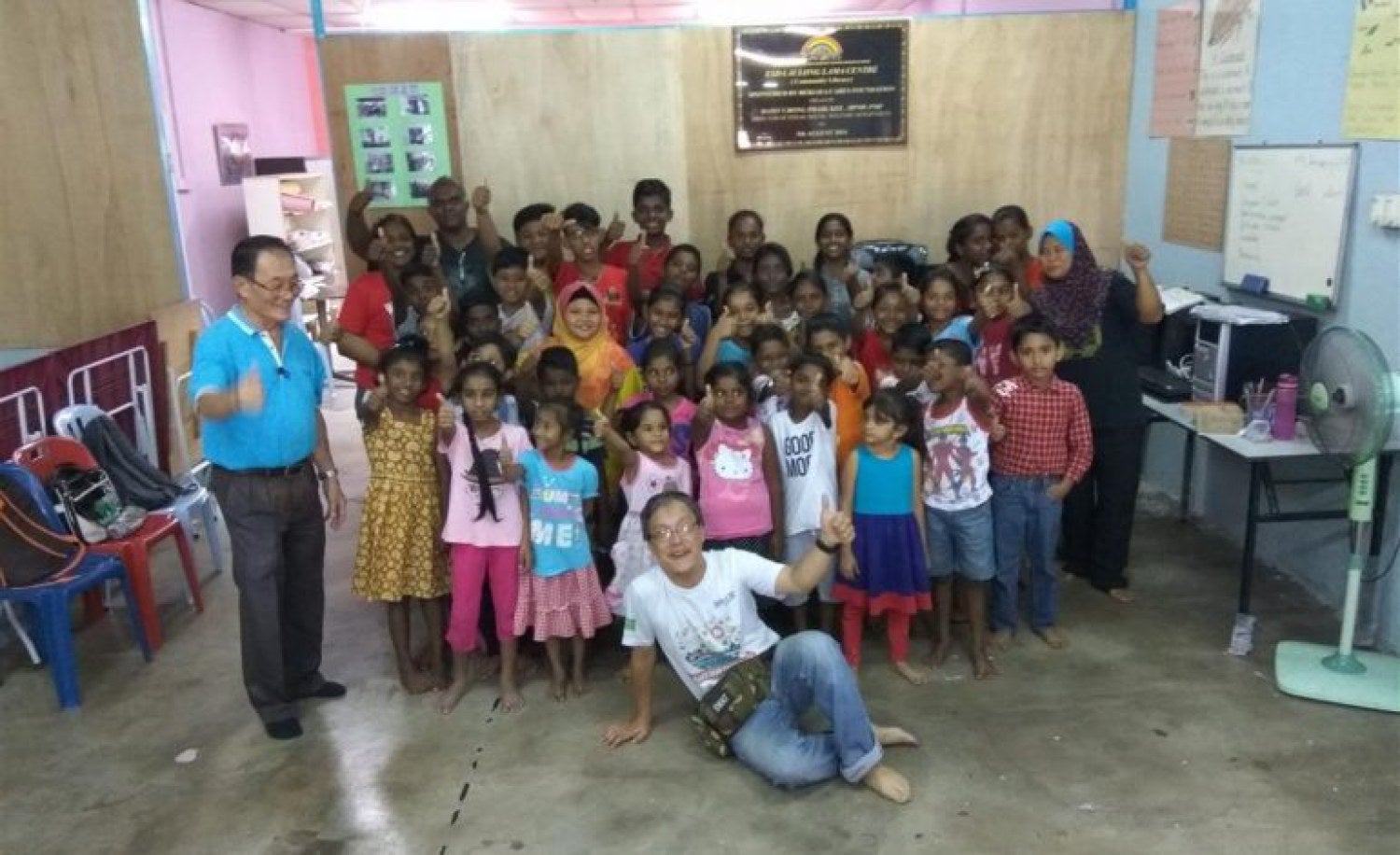 Stephen Chow with the teachers and children at Esda’s learning centre in Taiping. Photo: Esda

Due to complications at birth, Stephen Chow Chee Kheong was diagnosed with cerebral palsy and sent to the Cerebral Palsy (Spastic) Children’s Association of Penang in Malaysia at the age of two.

But thanks to his own fierce determination and the Boys’ Brigade, Chow has defied the odds to improve both his physical and mental capabilities.

Not only that, he has tirelessly served the less fortunate via a community centre he founded in 1999. 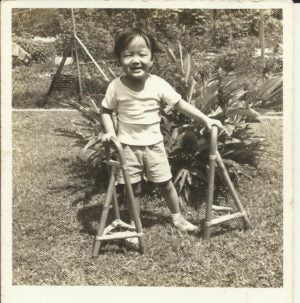 Chow learning to walk with tripods when he was four at the Cerebral Palsy (Spastic) Childrens Association of Penang. Photo courtesy of Stephen Chow

For this father of three, this year marks the 20th year of giving back to the community through the Taiping Community Service Society, also known as Esda, which means “mercy” in Greek. Chow is the founding director and chairman of Esda.

The non-profit organisation provides services to neglected and marginalized groups, irrespective of race or religion.

But it has not been a smooth ride, both when he was growing up as well as running the centre.

Chow’s mother told him that when he was born in 1971, his heart stopped beating for a few minutes, so oxygen was prevented from reaching his brain, leading to cerebral palsy.

He then attended the Cerebral Palsy (Spastic) Children’s Association of Penang until the age of 14, when he completed his primary education. 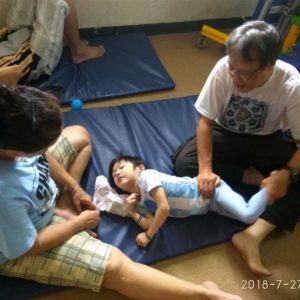 Chow (right) doing physiotherapy with a child at the Esda learning and development centre. Photo: Esda

Growing up, he could not speak clearly nor walk steadily.

“Besides my physical limitations, I am also a slow learner. My health was very weak and I felt that my life was meaningless. However, my life and abilities were transformed when I joined the Boys’ Brigade at the age of 14,” shares Chow, adding that he was a member for seven years.

Activities like marching, camping, obstacle race and rugby made him stronger and improved his physical abilities. His speech and learning skills also got better.

All that gave him more confidence in life, which led him to push to be accepted in a mainstream secondary school despite some hesitance from his teachers and even his mother.

Chow was eventually placed in the Remove Class at Sekolah Menengah Raja Tun Uda, Bayan Lepas, near his house. He was the oldest student in the class. 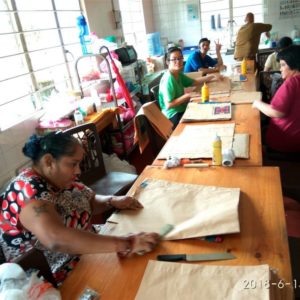 However, he struggled to cope with school work and was also verbally bullied by other boys.

With much hard work, he managed to pass his SRP (Sijil Rendah Pelajaran) examination.

“I still remember very clearly when I was in Form 3 and trying my very best in the SRP examination. During the exam, I was the last one to leave the hall because I was very slow. I put all my strength into writing and answering the questions very carefully.

“But when the results came out and were posted on the notice board, my name was not there. I rushed to the headmaster’s office very depressed, and I think I cried too. 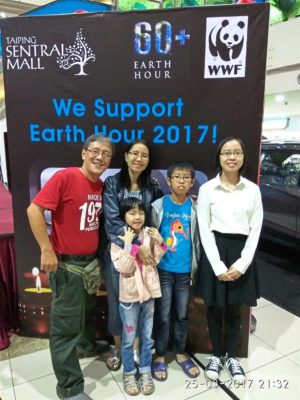 Family photo of Chow with his wife Gin Choo and their three children. Photo: Stephen Chow

“Later, I was told that my exam papers got lost and the HM told me to re-sit the exam. My mind nearly blew up. However, a few days before Christmas, my teacher called to say they had found the papers and that I had passed all of them. I thanked God for the wonderful gift for Christmas,” he shares.

Chow continued to study and sit for his SPM but did not do well. He then worked in a factory for a few months.

“After that, I felt strongly that I should go back to the spastic centre to help. I volunteered for a few months and then applied for a job as a physiotherapy aid. I was the first ex-student to be employed. It’s so amazing that, although my walking was not steady, I could teach others to walk!”

Over a year later, the spastic centre selected him to be a part of a one-year social work training program in Japan. Chow was 23 at that time. The program was fully sponsored and conducted by the Japanese National Council of Social Welfare.

“The social work training was a good opportunity for me to upgrade myself to the fullest potential in society. Social work is professional work. It touches people and brings hope into their lives,” says Chow, who was the only Malaysian and the only disabled person in the program. 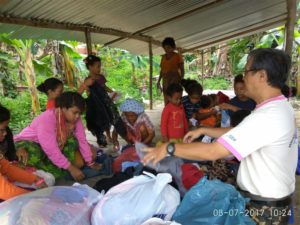 He had to learn Japanese and sit for exams, which again proved to be very difficult. He almost got kicked out of the program because he failed many times. However, Chow persevered, doing his homework past midnight. In the end, he made it through the program.

After returning home, he went to work at the Eden Handicap Service Centre in Penang, where he met his future wife, a Universiti Sains Malaysia graduate.

“This is the 19th year of my marriage to my wife, Gin Choo, and we have three beautiful children, Andrea, 17, Sean, 15, and Audrey, 10. Being a family man and a breadwinner is not easy. It’s all by God’s grace. Being a husband and a father, with a disability, fills me with joy but it’s also a struggle. There is so much commitment and heavy responsibility involved in bringing up a godly family,” he says.

Setting up and running the community centre has also been very challenging. The centre was almost closed down three times due to lack of funds. They also had to move seven times.

Today, the organisation has grown to two centers, with six full-time staff and two part-timers.

The first is a work center that currently caters to 52 people with different disabilities. The second centre is a learning development centre for 50 children (aged six to 14) from poor backgrounds and broken homes. Esda has also extended its community work outreach to the orang asli groups in Perak, Pahang and Kelantan.

“The first seven years were very tough for us. Many times, I wanted to close the organisation. Most people looked down on me because I am disabled and have very little education. But our Creator is so great. His miracle and grace sustains me even though I am nothing,” says Chow.

From the eighth year onwards, things began to improve, with more funds enabling the expansion of their centre and outreach work.

“We hope the government will give us a bigger piece of land for our growth and development. The bungalow that we bought is too small for 50 people. At the moment, we are renting a bigger premises temporarily at a very reasonable price but the owner plans to sell it soon,” says Chow, who also hopes to find successors for the organisation as well as employ more staff in the future.