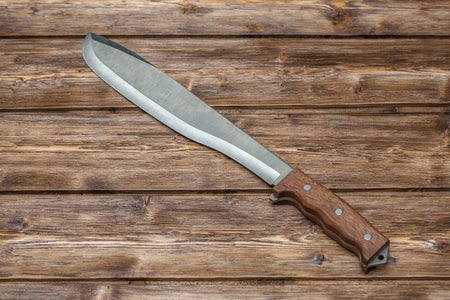 One man in Milton, Florida, USA, took the saying “Kill them with kindness” literally when he threatened his neighbor to kill him with a machete he named “kindness.”

Two neighbors, who were unidentified, said they heard yelling and screaming at the home of the suspect, identified as 30-year-old Bryan Stewart. This was reported by Pensacola News Journal on Friday, Jan. 11.

One of the neighbors went to Stewart’s house and told him to calm down. Stewart then told him he would “kill ’em with kindness.” The suspect suddenly reappeared with a machete, with the word “kindness” written on it.

The other neighbor, who followed the first neighbor,  then stepped in front to block Stewart from stabbing the threatened neighbor. This caused the victim to sustain a half-inch cut on his left hand.

The Santa Rosa County Sheriff’s Office arrested Stewart, who, according to deputies, smelled of alcohol. The suspect also had to be tased so he could enter the police car properly.

Stewart is currently held at the Santa Rosa County Jail on $20,000 (around P1.04 million) bond, and was charged with aggravated assault with a deadly weapon, as well as aggravated battery.  Katrina Hallare /ra

Alaska man strikes roommate with ‘Legend of Zelda’ sword, then with a real knife

Husband stabs Pinay to death in California, kills self afterward