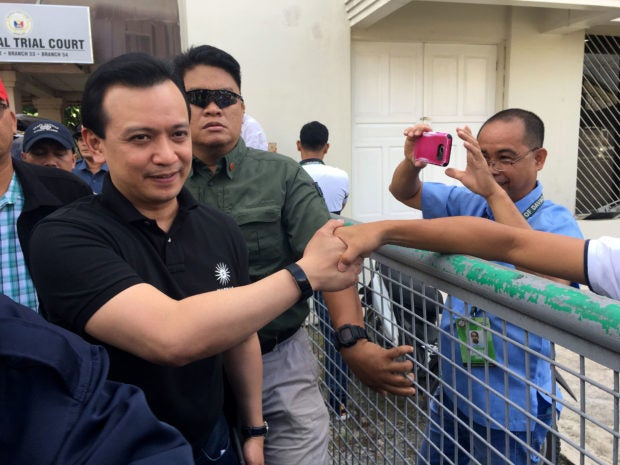 Supporters of Senator Antonio Trillanes IV gathered this morning during the arraignment of the solon’s libel case at Davao City Hall of Justice. PHOTO BY BARRY OHAYLAN

Villarin said he took the initiative of informing the Davao City police of the presence of Trillanes, one of the staunchest critics of President Duterte, in the absence of security augmentation request from the court.

In an interview with reporters, Trillanes said the four cases filed against him were intended to harass and distract him from his duty as a member of the opposition.

“These are just harassment cases just to inconvenience me and to distract me from my duty but I will not be distracted. I will continue my mandate as a member of the opposition,” Trillanes added.

The four counts of libel cases filed against Trillanes included those filed against him by the President’s son Paolo and lawyer Carpio on his earlier statement that the younger Duterte and his brother-in-law Carpio were allegedly involved in a scheme to extort money from ride-hailing firms; and another set of libel cases  on the senator’s allegation on Pulong’s involvement in the P6.4 billion drug shipment that slipped past the Bureau of Customs in 2017.

Trillanes said he volunteered to be arraigned in Davao City even if he could opt not to just to prove that he recognized the jurisdiction of the Davao Court.

He arrived with some members of his security and the Senate sergeant-at-arms at the Francisco Bangoy International Airport onboard Philippine Airlines Flight 2809 around 5:40 a.m. and proceeded to the Hall of Justice around 8 a.m.

Asked if he felt safe in Davao, he said, “Nandito naman ang mga police natin, nandito rin kayo, sa (Our policemen are here, and you are  here, the) media, so, it would be very difficult to do anything malicious.”/lzb/cbb