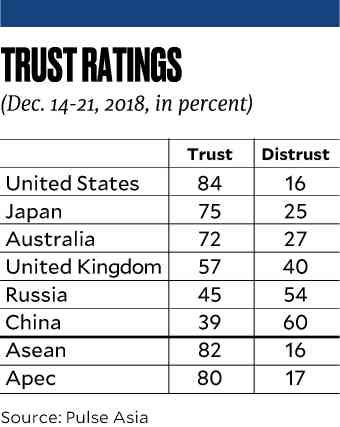 Six of 10 Filipinos are distrustful of China, which is embroiled in a territorial dispute with the Philippines in the South China Sea, while eight of 10 trust the United States, according to the latest Pulse Asia survey.

Fifty-four percent of the respondents also distrusted Russia, the Philippines’ new ally, down from 56 percent in March 2017.

The percentage of the respondents who trust the United States rose to 84 percent, from 79 percent in March 2017, while trust in Japan remained at 75 percent.

“I believe [the low trust in China] is largely due to the [South China] Sea disputes, unfortunately propped up by simmering historical and cultural biases against the foreign Chinese,” said Jay Batongbacal, director of the University of the Philippines Institute for Maritime Affairs and Law of the Sea.

The conflict in the South China Sea has “not been helped” by China’s conduct in the strategic waterway, which Filipinos “perceive as unworthy of their trust,” Batongbacal said.

Over the years, China has turned a string of reefs in the South China Sea into military garrisons.

By contrast, the United States, the country’s traditional ally, has stepped up “freedom of navigation operations” in the 3.5-million-square-kilometer sea to counter China’s claim.

“[It’s] because [Filipinos] understand that China continues to disrespect our rights over the [South China] Sea, that its aggression is selfish and at the expense of the rights of Filipino fishermen,” he said in a text message to the Inquirer.

Presidential spokesperson Salvador Panelo acknowledged that it may take time for Filipinos to begin trusting China.

“Maybe as we go along and see China showing its sincerity with respect to agreements between the two countries, that perception might change,” he said at a press briefing.

Batongbacal said Filipinos were historically and culturally closer to the United States.

Unlike the mainland Chinese, Filipinos share core values such as freedom and democracy with the Americans, and language is not a barrier between them, he said.

“We tend to see them (Americans) in a better light,” he pointed out, citing the close ties between the two longtime allies.

The Ulat ng Bayan survey, which had a margin of error of plus-or-minus 2.3 percentage points, showed that distrust was the prevailing sentiment toward China in every region and class (68 percent and 62 percent, respectively).

The Filipinos’ high trust in the United States also did not come as a surprise to Panelo.

“It’s understandable for Filipinos to feel that way … Because we’ve been used to the United States being our ally, so we’re used to America more,” he said in a press briefing. —Reports from Marielle Medina, Jeannette I. Andrade, Julie M. Aurelio, Marlon Ramos and Inquirer Research