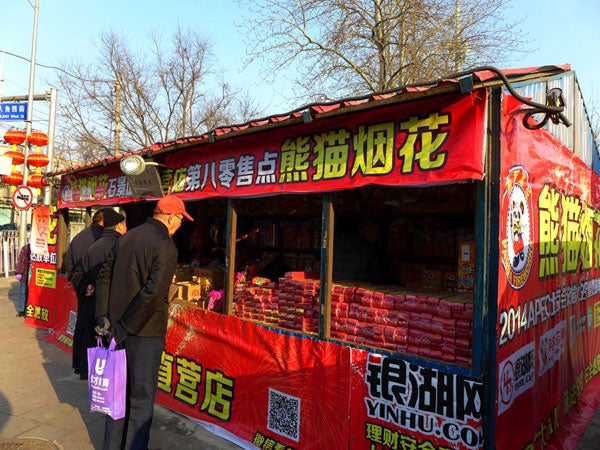 Customers look at fireworks at a retail stand in Shijingshan district in Beijing on Feb 13, 2015. Photo via China Daily

BEIJING — Buyers must use their ID cards to buy fireworks in Beijing during the upcoming Spring Festival, a city official said recently, which is the latest measure to control fireworks after placing bans on the materials in special regions across the city.

Tang Mingming, an official from the Beijing Emergency Management Bureau, said that the city will cut the retail outlets of fireworks from around 80 to 30, with no outlets within the fifth Ring Road, and sales will only take place from Jan 30 to Feb 9.

Each outlet will be equipped with special devices to identify buyers with their ID cards, and if safety problems occur, the buyers will be punished, Tang said, according to a report on the newspaper Beijing Youth Daily.

Beijing has already banned fireworks within the fifth Ring Road in recent years, and some districts also banned fireworks in certain regions. Tang said that the Tongzhou district, Beijing’s sub-center, will completely ban fireworks this year.