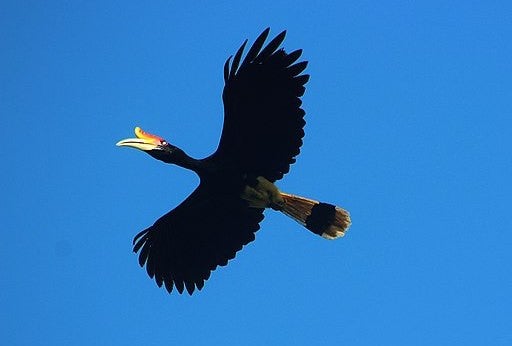 MEDAN, Indonesia — Authorities in Riau have arrested a man allegedly involved in illegal poaching after he posted a video of himself slaughtering an endangered bird on social media.

The Riau Natural Resources Conservation Agency (BKSDA) joined hands with the Kuantan Singingi (Kuansing) Police to track down and apprehend Arhedi, 29, for allegedly killing a hornbill on Friday evening.

Arhedi, who is originally from Lebak, Banten, is a rubber plantation worker in Gunung Toar subdistrict, Kuansing, Riau. The police are still on the hunt for his coworker, OG, who allegedly took down the bird with a slingshot.

A video of Arhedi chopping up the hornbill went viral on social media and alerted the police.

Riau BKSDA spokeswoman for Dian Indriati said the authorities confiscated what remained of the animal during the arrest.

Hornbills are protected under Law no. 5/1990 on the conservation of biological resources and the ecosystem.

There are 62 species of hornbills in the world and Indonesia is home to 13.

NGO Rangkong Indonesia explains on its website that hornbills are known as “jungle farmers” because they are spreader of seeds, especially big trees. They fly as far as 100 kilometers, making the distribution of various seeds expansive.

Three out of 13 hornbill species in Indonesia are endemic: the Sulawesi hornbill, Sulawesi red-knobbed hornbill and Sumba hornbill.

“The slaughter of the bird was uploaded by a Facebook account owned by OG, also known as Oyon, on Tuesday, Jan. 8, 2019,” Dian said as quoted by kompas.com. “Then, we obtained the information that the incident took place in Riau.”

Kuansing Police chief Adj. Sr. Comr. Mustofa said after capturing the bird, both men killed it with a machete.

“Before they cooked it, they took pictures and uploaded them onto social media,” he said.

Hunters often use social media to show off their catch and also sell protected wildlife.

Sr. Comr. Rony Samtana said the arrest had stemmed from a cyber investigation conducted on Facebook. From the patrol, he said, the police tracked down one account under the name of Keyla Safittrie, who was offering protected animals. It was later discovered that Arbain managed the account.

Rony added that during the operation, Arbain offered to sell to an undercover police officer three baby lutungs or langurs.

Three lutung species are listed as protected by the government.

Although hawk-eagles are of “least concern” in the International Union for Conservation of Nature (IUCN) list, the bird is protected under Indonesian law.

“The suspect admitted to the police that he had been trading protected animals for six months using a fake Facebook account,” Rony said.