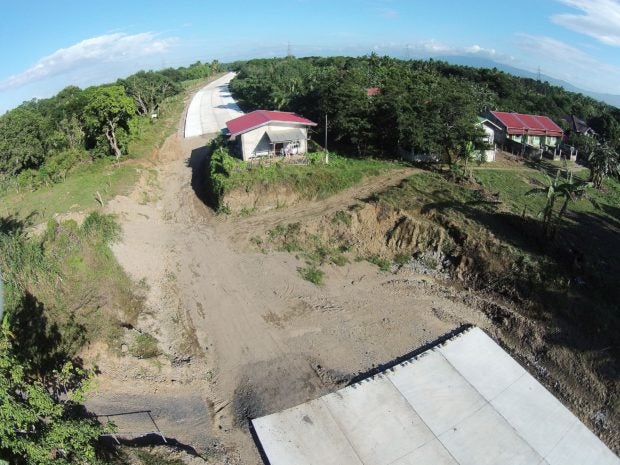 DISCONNECT This house at Barangay Bayanan, San Pascual town, Batangas province, may need some bypassing as it lies oddly in the middle of a 9.69-kilometer bypass and diversion road, no thanks to right of way issues. —GRIG C. MONTEGRANDE

SAN PASCUAL, Batangas — A single-story house stands in the middle of a newly built concrete road at Barangay Bayanan in this town, an oddity that speaks volumes about planning for an infrastructure project funded by the national government.

Construction workers over the last two years had to literally skip the Brucals’ residence in the middle of the highway, leaving the house to stand on a mound about 3 meters above the paved road.

“We just had the house built last year,” Victoria Brucal said as she and her young daughter hurried out of their home, its walls still unpainted, for another meeting with the government on a Thursday afternoon.

She said her family was having problems selling the house to the government as they had only tax declarations to prove ownership of the property.

The government had offered them P710,393.34, but this was only for the house. They were not offered anything for the land, which is about 100 square meters.

Under Republic Act No. 10752, or the Right-of-Way Act, the government may take private real property for national government infrastructure projects after paying the owners the appraised value.

Section 2 of the law states that the government must ensure owners “are promptly paid just compensation for the expeditious acquisition of the required right of way for the projects.” 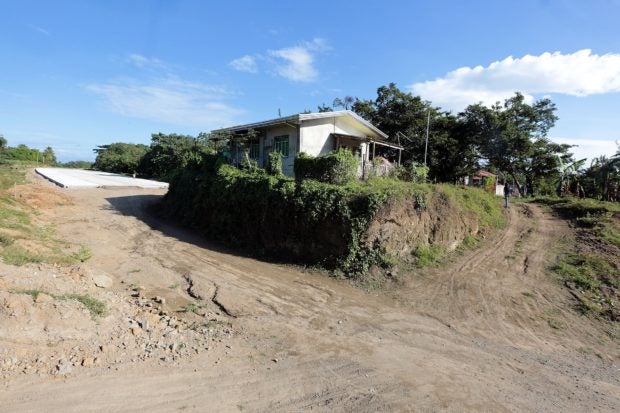 But requirements to claim compensation include land titles or, in the case of imperfect titles such as the Brucals’, at least 30 years of “continuous, peaceful possession” of the property.

Several other residents also only have tax declarations to present, said a 65-year-old landowner, who asked not to be named.

Luckily, the landowner only had a couple of banaba trees to lose when the road ate up 2,000 sq m of her property, but she had not been paid yet even for those trees.

“We gave them the permit to enter but told them not to touch any of the structures until we get paid,” said another property owner, Juling Espiritu, 69.

Three of her relatives’ houses would have to be torn down, eventually.

In 2017, the Department of Public Works and Highways (DPWH) started the construction of at least two major roads in Batangas—the 9.69-kilometer Bauan-San Pascual-Batangas City bypass and diversion road and the 11-km Lipa City-Padre Garcia Diversion Road. 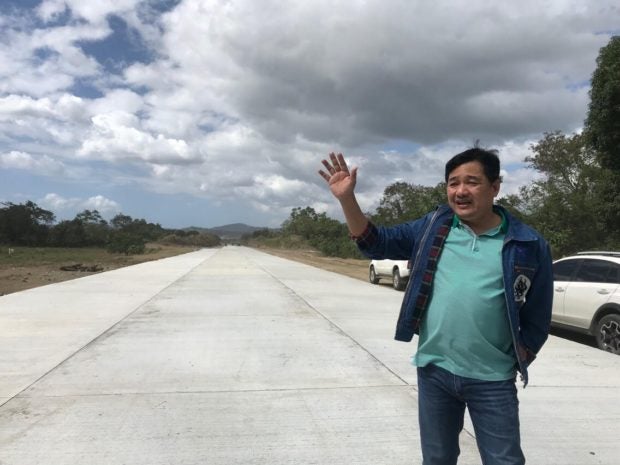 The projects were proposed by Deputy Speaker Raneo Abu and Sen. Ralph Recto, respectively. Abu represents the second district of Batangas, while Recto, a former Batangas representative, is the husband of Lipa City Rep. Vilma Santos-Recto.

The DPWH said over 50 percent of the projects had been completed and some portions were already passable to pickup trucks or sport utility vehicles.

To this day, however, not a single landowner had received compensation.

At Lipa’s Barangay Talisay, the DPWH had completed the first 1-km segment of the concrete road but stopped construction right before the approach to Jubilant Homes, a 10-year-old low-cost private subdivision, leaving a long stretch of dirt road.

“We’ve already spent more than P300,000 [to have the land titles fixed and comply with
DPWH requirements] but haven’t received a single centavo [from the government],” said resident Marcelino Labo, 59, whose family owned two properties (covering a total of 4,000 sq m) in Talisay.

According to the DPWH, the Lipa-Padre Garcia road will follow an existing village road and steer clear of Jubilant Homes, a community with more than a hundred houses.

Despite being allocated P234 million in the 2018 budget, project implementation was stalled due to right of way problems.

Abu said the Bauan-San Pascual-Batangas City route design had been in the pipeline since 2014 but the DPWH opted to prioritize road widening at the time.

Marvey Gonzales, head of the DPWH Task Force on Right of Way Acquisition in Batangas and Cavite provinces, said 147 title holders were claiming compensation in the Bauan-San Pascual-Batangas City project and 112 in the Lipa-Padre Garcia project.

He said the DPWH had paid a few of the claimants, including paying about P5 million to one landowner, but only for the cleared out crops and trees.

Finding an appraiser seemed the primary cause of delay in both projects.

Under the law, only government financial institutions or central bank-accredited appraisers are allowed to assess property for right of way acquisition.

Review of the law

Gonzales said it was only in November 2018 that the DPWH found an independent appraiser—after efforts to contract Land Bank of the Philippines or Luzon Development Bank failed and three unsuccessful bids for a private appraiser—for the Bauan-San Pascual-Batangas City project.

The DPWH is still looking for an appraiser for the Lipa City-Padre Garcia project, he said.

“Ours is only an oversight function. And we see that what really hampered [the project] were the strict provisions [in the Right-of-Way Act],” Abu said.

He said he would initiate a review of the law, particularly the appraisal policies and how to compensate owners, including those without property titles.