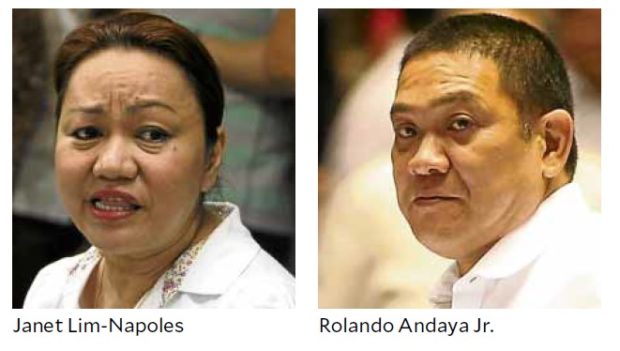 The Sandiganbayan has rejected the appeal of House Majority Leader Rolando Andaya Jr. and relatives of plunder convict Janet Lim-Napoles for the dismissal of nearly 200 criminal cases against them in connection with the P900-million Malampaya Fund scam.

In a resolution dated Jan. 8, the antigraft court’s Special Third Division said the defendants did not raise new arguments that would warrant a reversal of its Aug. 20, 2018, resolution denying the motions to quash.

This meant the graft and malversation charges filed against the defendants were valid and should clear the way for a full-blown trial.

The cases involved the alleged diversion of the discretionary fund to ghost livelihood projects for the victims of widespread flooding caused by Tropical Storms “Ondoy” and “Pepeng” in 2009.

Just like in the P10-billion pork barrel scam, Napoles was accused of running a network of 12 foundations that served as conduit for the funds.

The scheme was achieved through the forgery of request letters from the mayors of 97 cities and municipalities in Luzon.

The court maintained that contrary to Andaya’s claim, the allegations were not ambiguous or confusing.

Andaya—the budget secretary at the time of the scheme in 2009—sought details of how and when the conspiracy was committed, his particular acts, the manner by which he allegedly approved the Department of Agrarian Reform’s request for the funds, and the standard operating procedures that he violated.

But the court said these details did not need to be stated in the charge sheets, because prosecutors only had to state the “ultimate facts … which the expected evidence would support.”

The details Andaya sought would have to be threshed out in the trial.

Likewise, the court rejected the argument of Napoles’ children James Christopher and Jo Christine that prosecutors had failed to specify the documents they allegedly forged, as well as the time and place when they allegedly committed the offense.

The court said these details were “not material ingredients of the offenses charged against them.”

It also denied Napoles’ claim that she could not be held liable because she was a private individual, not a public officer.

The Supreme Court has long settled that private individuals can be tried as conspirators.

In its resolution, the Sandiganbayan also rejected the argument of former Agrarian Reform Secretary Nasser Pangandaman Sr. and finance director Teresita Panlilio that the Ombudsman’s investigation was unreasonably delayed.

The court reiterated that the complaints initiated by the National Bureau of Investigation and the Ombudsman’s Field Investigation Office took two years and two months at most to resolve, and that the respondents were given ample opportunity to respond.

It noted that the issues involved were “complex which required a significant amount of time to resolve soundly.”