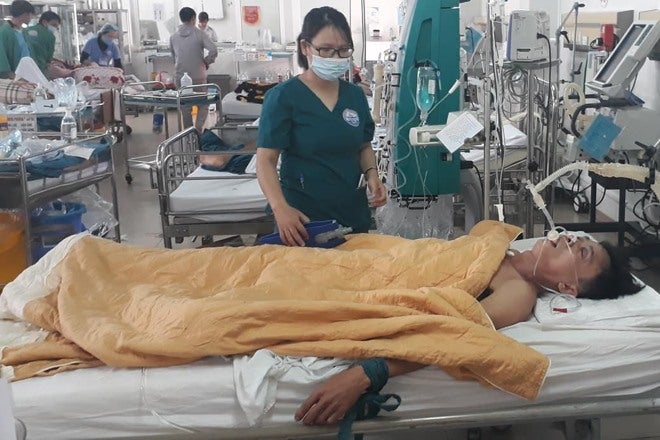 Nguyễn Văn Nhật, 48, in a coma at the Quảng Trị General Hospital due to methanol intoxication after consumption of low-quality alcohol at a party on December 23. — Photo Zing.vn

QUẢNG TRỊ — A doctor in the central province of Quảng Trị in Vietnam has been receiving widespread praise for having used 15 cans of beer (five liters) to bringing a male patient back from the brink of alcohol poisoning.

On December 25 last year, Quảng Trị General Hospital received three patients all in coma, including Nguyễn Văn Nhật, 48, the head of a communal health station, who were all displaying symptoms of methanol poisoning after attending a party two days earlier.

The methanol concentration in the wine samples taken from the party was reportedly over 1,110 times the permitted level.

On December 26, head of the hospital’s Intensive Care and Toxic Management Department Lê Văn Lâm decided to feed three cans of beer to Nhật via a tube, with another can for each passing hour.

The whole process, lasting 12 hours, including the amount of ethanol level in the beer, was carefully monitored.

Explaining the reasoning, the doctor said in case of alcohol poisoning, aside from continuous dialysis, drips and ventilators, ethanol could be simultaneously fed to the patient to relieve the intoxication.

Ethanol and methanol are metabolized by the same enzyme, but ethanol has a higher affinity to the enzyme so it delays the body from taking in methanol, which otherwise would result in severely toxic formic acid.

This delay earned the doctors precious time to carry out dialysis.

Methanol, without being metabolized by the body, was eliminated by the kidneys in urine, Dr Lâm said.

After the 15th beer can, Nhật showed his first signs of consciousness.

“At the time, Quảng Trị Hospital didn’t have a sufficient stock of pure ethanol for medical purposes, while the patient was in a critical condition, so the doctors decided that either wine or beer with ethanol must be administered quickly,” Nhật told the online newspaper vnexpress.net.

At first, doctors considered using wine but since the origins of the alcohol couldn’t be determined at such short notice, it would have been disastrous if the alcohol contained high levels of methanol as is often the case with ‘fake alcohols’ in Việt Nam that was likely the cause of the poisoning in the first place.

“We finally settled on beer because despite the low level of ethanol most brand names have proper tags and labels with sufficient information on its content,” he said.

After nine days of hospitalization, Nhật was discharged to the relief of his wife, Lê Thị Ái Sương, and the entire family.

Sương said she was perplexed when Dr Lâm told her to go and buy cans of beer for her husband.

She was not alone in the confusion as many readers also expressed their surprise at such a strange procedure, with many jokingly saying that the common idiom ‘lấy độc trị độc’ – the equivalent of the Western expression ‘the hair of the dog’ – was working this time.

However, the administering of ethanol during methanol intoxication is already established in the health ministry’s guidelines for handling poisoning.

Dr Nguyễn Trung Nguyên from Hà Nội-based Bạch Mai Hospital said this method must only be used in hospitals under the watch of trained doctors, and stressed that people should not try it by themselves since it must be determined whether the poisoning was due to methanol or ethanol intoxication.

Nguyên’s colleague, Dr Lương Quốc Chính, emphasized that the key cure to the patient in Quảng Trị’s case was dialysis, not the injection of the beer.

The health ministry issued an official press release on Friday, again calling for responsible drinking and reiterating the severe health hazards of consuming ethanol and methanol – including cancer risks, neuropsychiatric problems, heart issues, as well as impacts on the reproduction system.

It reiterated that production of alcoholic beverages are not allowed to use methanol but ethanol that has met strict national technical standards.