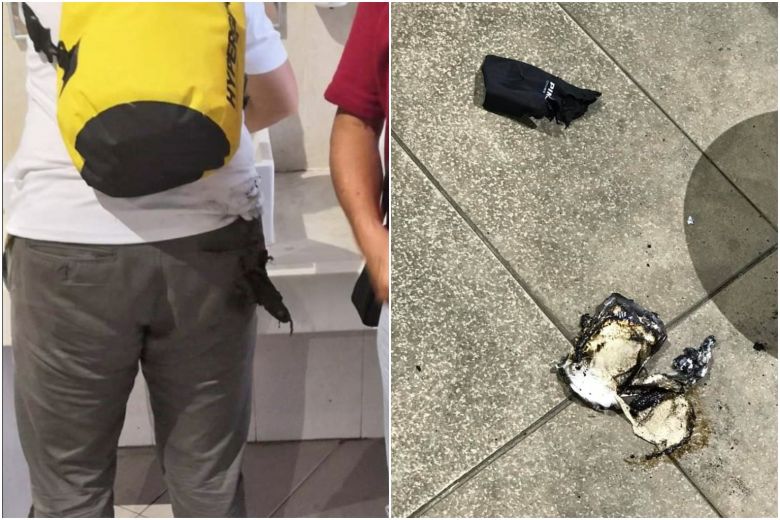 Photos show the badly burnt and melted remains of the power bank on the floor, as well as a large frayed hole in the man’s back pocket.PHOTOS: LIANHE WANBAO

SINGAPORE — A man was taken to hospital last Friday evening after suffering burns from a power bank, which had exploded in his pocket.

The middle-aged man at Bedok Interchange Hawker Center burnt his palm when he reached into his pocket to remove the device, reported Chinese-language daily Lianhe Wanbao.

The Singapore Civil Defense Force said it responded to a call at about 6.:40 pm at Block 209 New Upper Changi Road.

The man, who is in his 40s, was taken to Changi General Hospital.

Wendy Hong, 60, told The Straits Times that she was having her dinner when she heard a commotion, with several diners standing up, surrounding the injured man.

“There was a thick, grey smoke, and I could also smell a very strong stench of burning chemicals,” said the part-timer who works in the clothing industry.

Passers-by helped to put ice on his hand, wrapping it up with plastic food wrap.

“His face was screwed up – it was clear he was in a lot of pain,” she added, noting that the ambulance arrived shortly.

Photos given to Lianhe Wanbao show the badly burnt and melted remains of the power bank on the hawker center floor, as well as a large frayed hole in the man’s back pocket.

Duck rice stall assistant Huang Jia Qiang told Lianhe Wanbao that he heard a small explosion, in addition to the smell of something burning.

He said that the man had been using his phone while eating, with the phone connected to the power bank in his pocket at the same time.