In Saudi weddings, small is the new beautiful 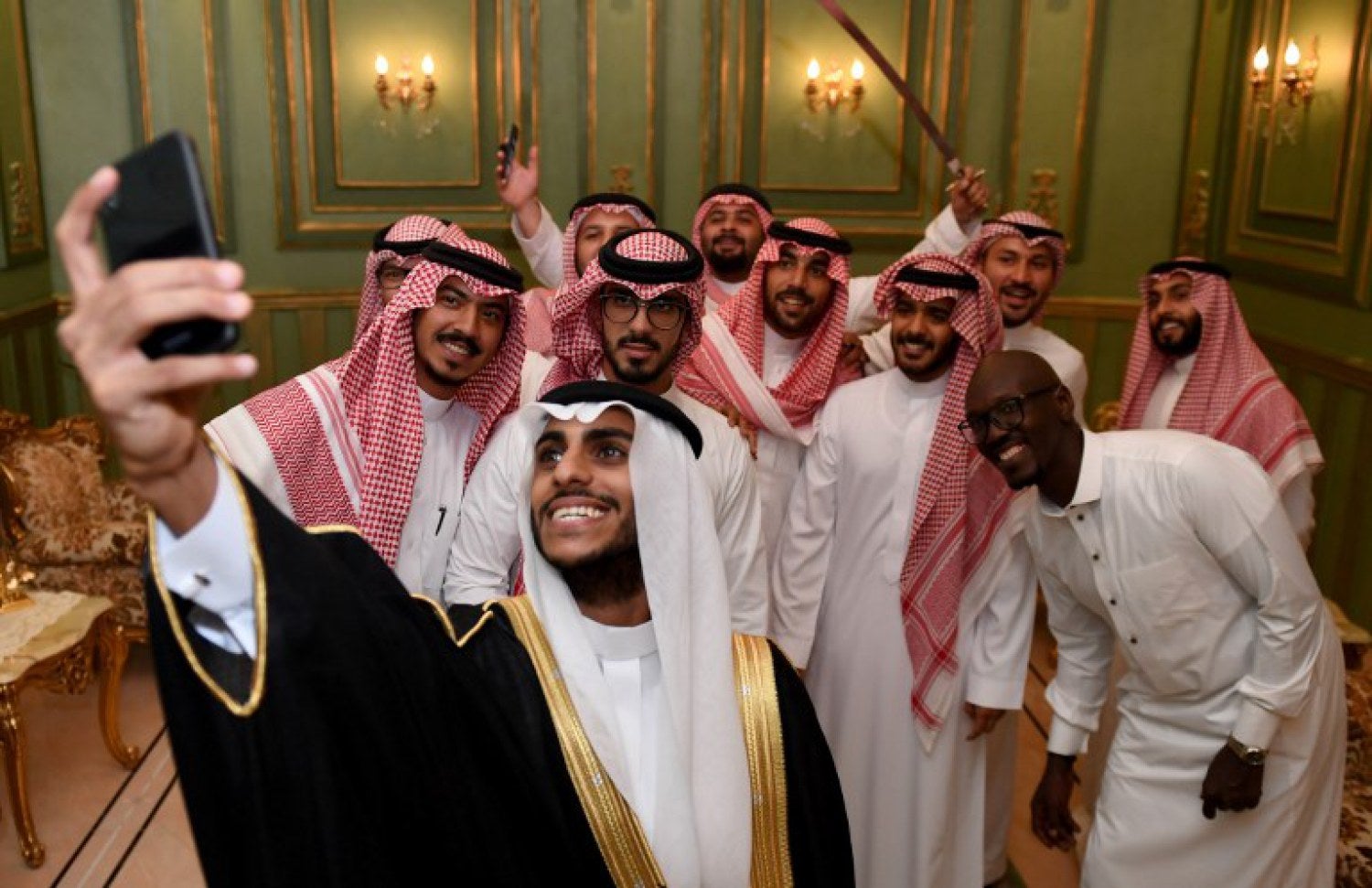 Saudi groom Basil Albani poses for a selfie with his friends during his wedding at his home in the Red Sea resort of Jeddah on September 6, 2018. It was a Saudi wedding like any other — clutching a decorative sword, the groom bobbed and swayed in a traditional dance. But there was one striking difference — a tiny guest list. Weddings in the oil-rich kingdom are typically lavish affairs, with a bulging guest list which is seen both as a social obligation and a symbol of affluence. AFP

JEDDAH, Saudi Arabia – It was a Saudi wedding like any other — clutching a decorative sword, the groom bobbed and swayed in a traditional dance. But there was one striking difference — a tiny guest list.

Weddings in the oil-rich kingdom are typically lavish affairs, with a bulging guest list which is seen both as a social obligation and a symbol of affluence.

Such expectations are often a source of economic strain for grooms, who foot most of the bill which includes renting out exorbitantly-priced marriage halls where nuptial celebrations are usually held.

But millennials like Basil Albani are increasingly hosting weddings at home, defying family traditions and social pressure and making huge savings instead.

It was a microscopic figure by Saudi standards.

“People go all crazy with weddings, inviting hundreds of guests and spending millions in one night to get the best singers, best bands, best thobes,” said Maan Albani, the 21-year-old brother of the groom, dressed in a gold-trimmed cloak.

“We wanted to do something different with a smaller celebration at home, which can also be fun.”

Although prevalent for years, home weddings symbolize a war on excess by the country’s youth as much as they are a barometer of the lagging economy.

They appear to be gaining popularity in the petro-state in a new age of austerity amid low crude prices.

Saudi Arabia has one of the world’s highest concentrations of super rich households.

But with cuts to cradle-to-grave subsidies and a new value-added tax amid soaring youth unemployment, Saudi households are seeing stagnating disposable incomes and what experts call a lifestyle downgrade.

The change in fortunes in the once tax-free kingdom facing a youth bulge is a stress point that poses a challenge for Crown Prince Mohammed bin Salman, the country’s de facto leader.

And there are signs of an impact on the Saudi wedding market.

Statistics on frugal home marriages are hard to come by, but two wedding planners with a large Saudi clientele told AFP that average spending on marriages had dropped by 25 percent over the past year, with many trimming back the pomp and pageantry.

A retailer of wedding invitation cards in Riyadh said business fell by 70 percent over the period, as many customers demand rich designs at cheaper prices.

“Weddings should not start with a bank loan,” said Murtada al-Abawi, a 29-year-old Uber driver.

He created a family storm when he suggested a small soiree in the local community center for his own wedding in 2016.

A physical altercation broke out with his elder brother, who branded the idea shameful because “people will call us poor”.

His parents and those of the would-be bride were equally furious but, ultimately, they all caved when Abawi cannily resorted to emotional blackmail.

He threatened to remain unmarried and flee to neighboring Bahrain, a relatively liberal archipelago that many conservative Saudis view as a seedy offshore Las Vegas.

Abawi put his foot down: no dowry, no gold, no post-wedding party.

For the main wedding party, he used another ploy — he invited all his friends and relatives so as not to offend anyone, but hosted the late-evening celebration on a busy weeknight, forcing families with school-age children to voluntarily opt out.

The experience led Abawi to start an “affordable marriage” self-help group in his native eastern city of Al Ahsa, which counsels young men on tackling the social pressure to overspend.

Not everyone is cutting wedding expenditure, however, with many Saudis still splurging on designer prom dresses for the bride and belly dancers from Egypt for the entertainment.

Many still succumb to the pressure — or choose to get hitched overseas to circumvent the cultural minefield that hosting a small wedding can become.

In a 2017 newspaper column titled “Expensive weddings, a waste of money”, writer Abdul Ghani al-Gash chided the kingdom’s religious scholars for failing to educate the masses that weddings were not an occasion to show off.

Weddings, typically segregated by gender, are also known for wasting colossal amounts of food. Mountains of food, which culturally reflect generosity and class, often end up in the trash can.

The pressure to keep up appearances amid rising costs and unemployment is prompting many young men to delay marriage up to the age of 40, the Saudi Gazette newspaper reported in September.

But even Saudis who can afford to splurge are discovering an aesthetic value in simplicity and cutting back waste.

“My wife looks back at our wedding and says ‘why did we even spend 9,000 riyals?'” said Abawi.

“We could have traveled with that money.” /cbb