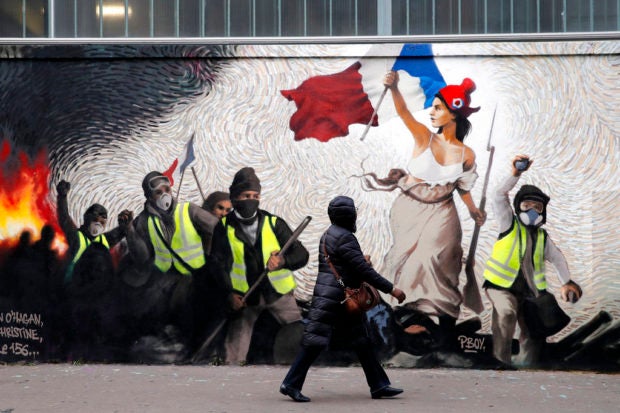 A woman passes by a mural by street artist PBOY depicting Yellow Vest (gilets jaunes) protestors inspired by a painting by Eugene Delacroix, “La Liberte guidant le Peuple” (Liberty Leading the People), in Paris, Thursday, Jan. 10, 2019. French President Emmanuel Macron is facing a mountain of challenges in the new year starting with yellow vest protesters who are back in the streets to show their anger against high taxes and his pro-business policies that they see as favoring the wealthy rather than the working class. (AP Photo/Christophe Ena)

PARIS — The central French city of Bourges is shuttering shops to brace for possible violence between police and yellow vest protesters, as the nationwide movement seeks a new stage for its weekly demonstrations.

Paris, too, is hunkering down for a ninth weekend of anti-government protests Saturday. France’s government has deployed 80,000 security forces for the day, and Interior Minister Christophe Castaner threatened tough retaliation against violence.

Online groups mounted calls through the week for mass protests in Bourges, but Paris police said they wouldn’t let down their guard, notably around government buildings and the Champs-Elysees, scene of repeated rioting in past protests.

The protest movement waned over the holidays but appears to be resurging, despite concessions by President Emmanuel Macron. Protesters want deeper changes to France’s economy and politics. /jpv