Kim reaffirms commitment to denuclearization in meeting with Xi 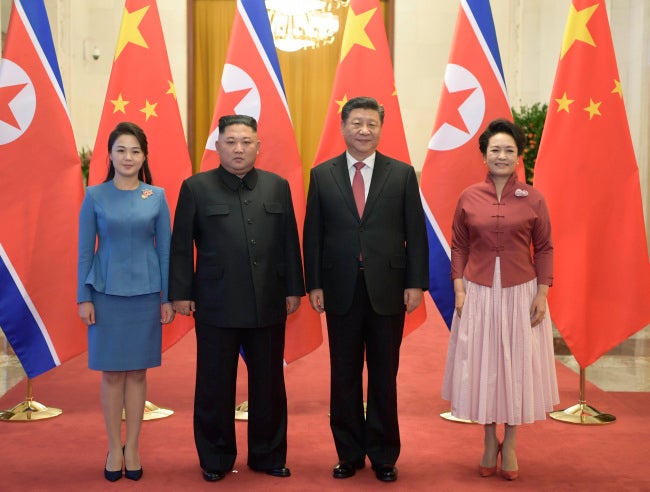 Chinese leader Xi Jinping and his wife Peng Liyuan pose for photos with NK leader Kim Jong-un and his wife Ri Sol-ju in Beijing on Wednesday. Xinhua-Yonhap via The Korea Herald

SEOUL — North Korean leader Kim Jong-un reaffirmed his determination for denuclearization of the Korean Peninsula and vowed to make efforts to yield positive results in the second summit with the United States, a Chinese news outlet reported Thursday.

According to Xinhua News Agency, Kim expressed his desire to pursue denuclearization and to resolve the Korean Peninsula issue through dialogue and consultations, during the summit with Chinese President Xi Jinping.

The four-day trip, which is Kim’s fourth official visit to China since the first visit in March 2018, came at the invitation of Xi. During the latest visit, Kim also visited an industrial zone in China

According to the report, the two leaders displayed a determination to make joint efforts to “advance the political settlement of the Korean Peninsula issue.”

Kim also said North Korea would make efforts for a second summit with the US President Donald Trump to achieve results that will be welcomed by the international community, Xinhua said. Kim also expressed hope for relevant parties to jointly push for a resolution on the ongoing denuclearization issue on the Korean Peninsula.

Xi praised the efforts of Pyongyang while underlining Beijing’s role in creating peaceful dialogue on the Korean Peninsula.

“It has become the international community’s common expectation and consensus for the dialogue to continue and yield results. The political settlement of the Peninsula issue faces a rare historic opportunity,” Xi was quoted as saying in the media report.

Xi expressed support for North Korea and the US holding summits and to bring out results to resolve concerns, through dialogue.

During the meeting, Kim also invited Xi to visit Pyongyang, the North Korea’s Korean Central News Agency reported. Xi readily accepted the offer and notified the North of his schedules, it added without elaborating.

Wrapping up his four-day trip on Wednesday, Kim met Xi again in the morning and visited an industrial site in Beijing. At Beijing Hotel, the two leaders met and reaffirmed their close relationship and vowed to “jointly make new contributions to regional peace, stability, development and prosperity,” according to Xinhua.

Before heading back to Pyongyang at 2 p.m., Kim stopped to visit Tong Ren Tang, the largest producer of traditional Chinese medicine in China, located in an economic-technological development zone in Beijing.

Spending some 30 minutes inspecting the production site, which was established around the end of 2004, Kim delivered a congratulatory message for their development and productions, according to KCNA on Thursday.

Departing Pyongyang on a train on Monday, Kim arrived in Beijing Tuesday. Xi and first lady Peng Liyuan hosted a welcome banquet for Kim and his wife Ri Sol-ju at Beijing’s Great Hall of the People, which lasted four hours. They also watched an art performance together, according to Xinhua. Tuesday was Kim’s 35th birthday.