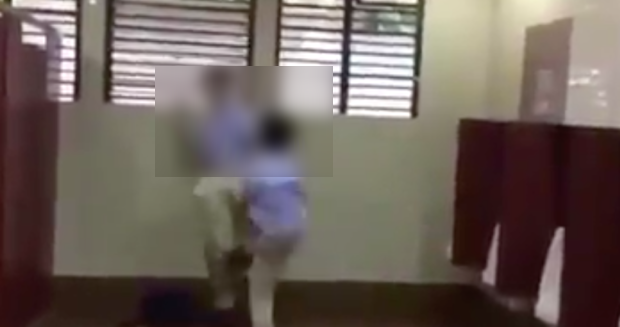 MANILA, Philippines — The student from Ateneo Junior High School in an alleged bullying video that went viral is claiming that his actions, where he appeared to assault a schoolmate inside a school comfort room, were in self-defense.

In a report from GMA News, the student said he was just defending himself, adding that it was the other student who provoked him into a fistfight.

READ: To the young man who was bullied at the Ateneo

“I was just defending myself. Hindi naman ako nambu-bully for no reason,” the student said.

(I was just defending myself. I do not bully for no reason.)

(He said he wanted to fight. I said ‘Okay, later after dismissal.’ So, during dismissal, we went to the CR. He was urinating and I talked. Then the incident on the video happened.)

The student said that his actions were not “bullying” because he was just defending himself.

“Para sa akin, hindi naman bullying yung ginawa ko because I was also defending myself naman in a way,” he said.

(For me, I did not bully anyone because I was also defending myself in a way.)

(In the video, however, it appeared that I was more aggressive. But before that, people don’t know what happened.)

In the viral video, the alleged bully could be heard asking his schoolmate: “Bugbog o dignidad? (Assault or dignity?),” prodding the other student to choose.

Moments later, the alleged bully removed his ID and walked up to the person shooting the video. He could be seen and heard saying: “Kung pinili niya yung dignidad, papaluhurin ko siya, hahalikan niya yung dalawa kong sapatos pero gusto niya bugbog (Because if he chose dignity, I will make him kneel, and he will kiss my shoes but he wanted to be beaten up.).”

In his conversation with GMA, the alleged bully said he regretted his “violent” behavior.

(I should not have reacted in a violent way.)

The mother of the student apologized for the incident.

“I would like to apologize for the action of my son, sa nasaktan nya, sa school, kung na-drag man ang school sa issue na ‘to, I apologize,” the mother said.

(I ask for people’s understanding for my son who is only a child.)