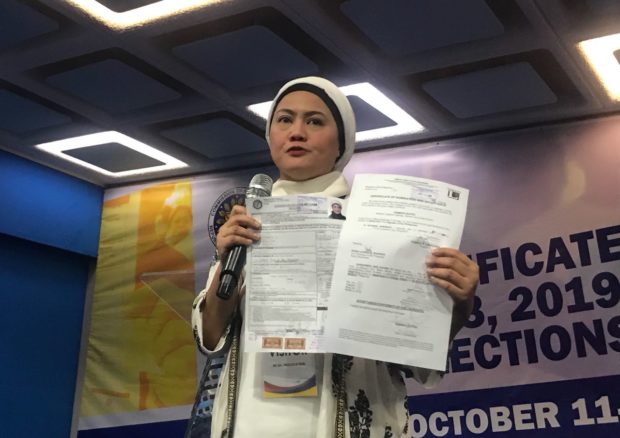 In this file photo, Samira Ali Gutoc-Tomawis presents to the media her certificate of candidacy and a document signed by Vice President Leni Robredo and Liberal Party President Francis Pangilinan related to her bid under the senatorial slate of the opposition. INQUIRER.net file photo / Cathrine Gonzales

In a speaking engagement before local officials of Roxas City, Gutoc claimed that if LGUs and barangays are aided properly, the federal charter — which provides politicians greater power — is unnecessary.

“The barangay should be honored and should be remembered as a very special (unit).  We can even be actually more powerful than the president, you’re the only one who has the three powers, exceptional power of the executive, of the judicial, at ang lehislatura,” the civic leader from Marawi, Lanao del Sur said.

Gutoc also noted that barangay officials do not need to wait for the nod of officials from Manila to obtain funds for their projects.

“Lakasan ang Local Government Code.  We Filipinos do not need new political impositions […] government starts with you,” she added.

Last October 2018, the House of Representatives lifted the term limits provision inside the proposed federal charter, which the Consultative Committee originally placed.

Speaker Gloria Macapagal Arroyo explained the move was a “collegial decision” by the House.

Aside from the term limits provision, the Vice President was also removed from the line of succession in case a President is unable to perform his or her duties.  Instead, the Senate President would take over the government in such cases.

When the proposed charter went through the second reading last December 4, the Vice President was reinstated as the official successor of the President, but provisions on term limits and anti-politcal dynasty were not reinstated.

After seven days, the House approved the same proposal on the third and final reading.

Gutoc vowed that she and other members of the OK slate will serve as the legislature’s “check-and-balance” for the executive department should they win in the coming May 2019 elections.

“Kami sa Senado as oversight — sana, kung mailuklok kami — will check the budget, check priorities, where are the orphans and the widows and the poorest sa probinsya?” Gutoc noted.