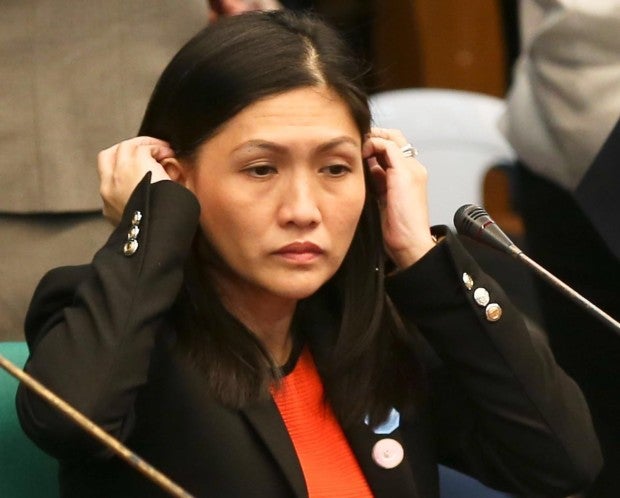 Maia Santos Deguito, former RCBC Jupiter branch bank manager, at the Senate hearing April 5, 2016, on the $81 million stolen from the Bangladesh Bank and was deposited to accounts in RCBC. LYN RILLON/INQUIRER PHOTO

Deguito was found guilty of seven counts of money laundering, imposing a penalty of up to seven years imprisonment for each count.

She was also required to pay not more than 200 percent of the value of the laundered amount.

The court said Deguito took advantage of her knowledge of the banking law and more than a decade of experience to facilitate “illegal transactions with ease.”

During the trial, witnesses testified that Deguito opened fictitious bank accounts where funds from the hacked bank account from Bangladesh were transferred.

“The accused must be responsible of her executed acts and implemented transactions as charged and described in the subject eight criminal information,” the court said.

The court added that the “most glaring” act of Deguito was the cash withdrawal from bank account under the fictitious name J.C. Lagrosas worth US$22,735 million on Feb. 5, 2016 at 3:16 p.m. and deposited to the account of William Go, supposedly another fictitious account name which was opened the same day 16 minutes earlier.

“This is the account opened by accused Deguito by her order, without initial deposit coming from Mr. Go and Mr. Go did not authorize the opening of this account,” said the court adding that Deguito proceeded with the transaction despite the stop payment instruction.

The court said that with Deguito’s acts the “accused must be penalized!”

“In conclusion, the prosecution evidence can stand by itself to convict the herein accused beyond reasonable doubt…Thus, after the prosecution has proved and established that accused is a covered person and the transactions described in the Information are covered transactions, the crime of violation of the subject law is fully proved and established.”

“The prosecution has accomplished and did it,” the court said.

Deguito was originally charged with nine counts of money laundering but the court acquitted her on one count because the facts involved in the case was a “copy paste” from one of the eight cases where she was convicted. /cbb