UK leader brings her ailing Brexit deal back to Parliament 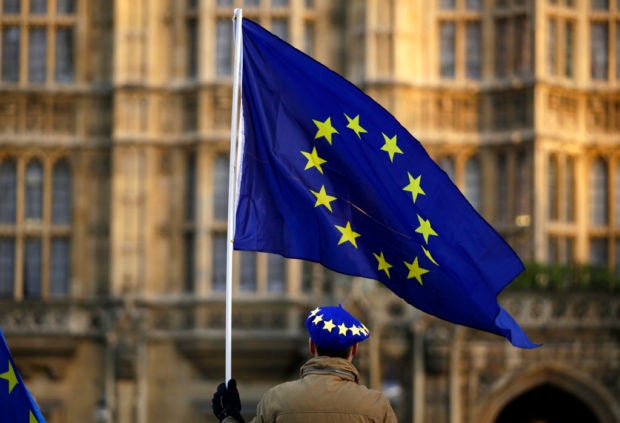 A pro-Europe demonstrator holds a flag outside the Houses of Parliament in London on Jan. 8, 2019. AP

LONDON — The British government was bringing its little-loved Brexit deal back to Parliament on Wednesday, a month after postponing a vote on the agreement to stave off near-certain defeat.

Lawmakers were beginning five days of debate on the agreement with the European Union setting out the terms of Britain’s departure from the bloc on March 29.

A vote, initially slated for mid-December, is now scheduled for Jan. 15.

Prime Minister Theresa May had promised to seek reassurances from the EU on the most contentious issue, the status of the Northern Ireland-Ireland border. But the bloc refuses to reopen the agreement, and opposition to the negotiated deal remains strong from both pro-Brexit and pro-EU lawmakers in Britain.

Jeremy Corbyn, leader of the main opposition Labour Party, said the delay “has achieved nothing beyond wasting a month.”

Brexiteers are urging the government to ramp up preparations for leaving the EU without a deal.

But many lawmakers, and businesses, say that would cause economic turmoil, as goods moving between Britain and the EU suddenly faced customs checks, tariffs and other barriers. On Tuesday, legislators in the House of Commons handed the government a symbolic defeat by backing an amendment to the Finance Bill that puts roadblocks in the way of government spending on “no-deal” preparations.

The vote, which saw 20 legislators from May’s Conservative Party rebel and vote with the opposition, indicates that a majority in Parliament opposes leaving the EU without an agreement.

But there is no clear majority for any single alternate course. Among the competing proposals are seeking a new deal, calling a general election or holding a second EU membership referendum.

The de-facto deputy Prime Minister, David Lidington, said the only way to avoid a disruptive no-deal “is for Parliament to endorse and ratify a deal.” /ee