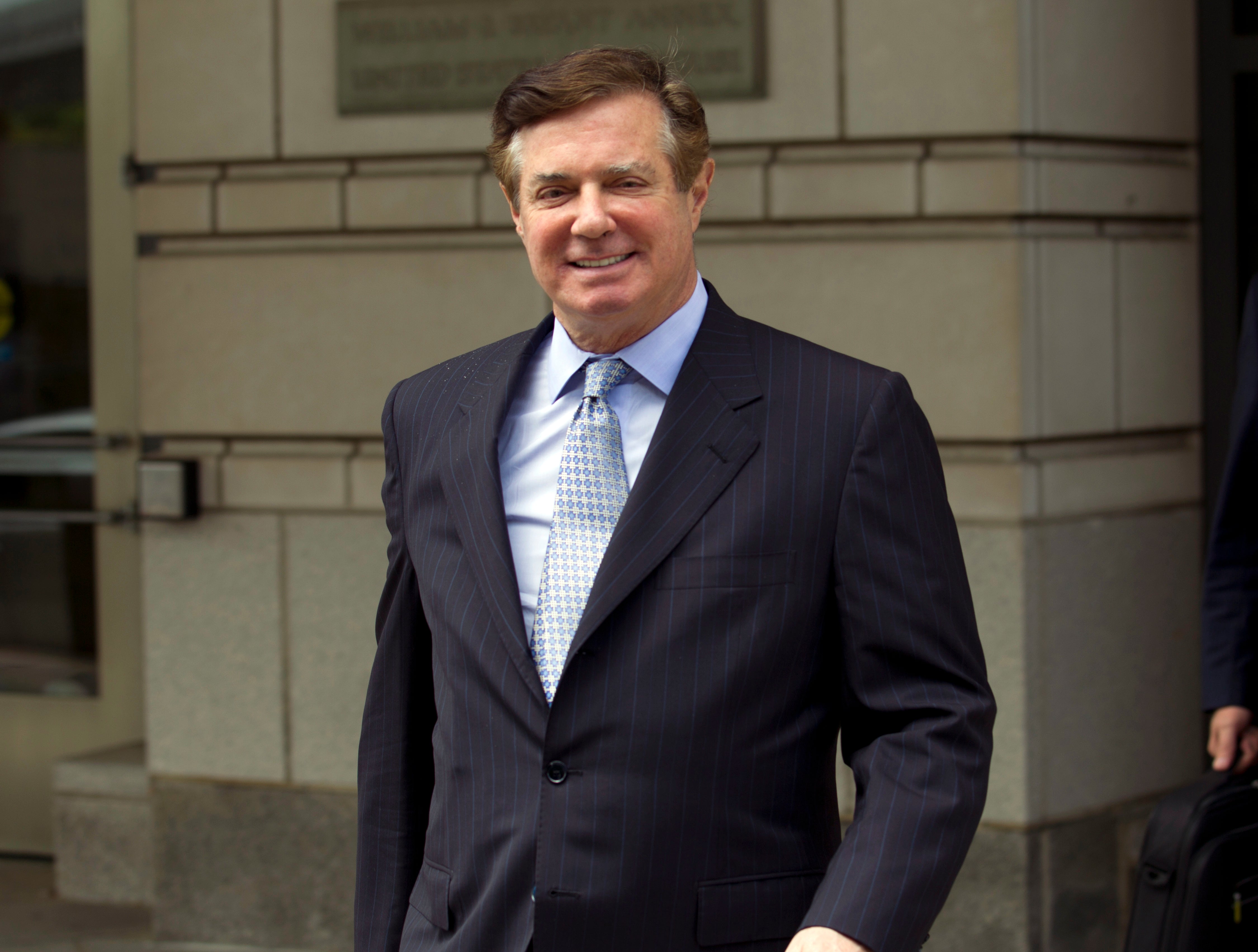 In this May 23, 2018, file photo, Paul Manafort, President Donald Trump’s former campaign chairman, leaves the Federal District Court after a hearing in Washington. Manafort is suffering from depression and anxiety and is at times confined to a wheelchair because of gout. That’s according to a court filing from defense lawyers Tuesday, Jan. 8, 2019, responding to allegations that Manafort has repeatedly lied to special counsel Robert Mueller’s team of investigators. (AP Photo/Jose Luis Magana, File)

WASHINGTON — Former Trump campaign chairman Paul Manafort shared polling data during the 2016 presidential campaign with a business associate accused of having ties to Russian intelligence, and prosecutors said he lied to them about it, a court filing showed.

The allegation marks the first time prosecutors with special counsel Robert Mueller’s office have accused Trump’s chief campaign aide of sharing election-related information with his Russian contacts. Although the filing does not say whether the polling information was public or what was done with it, it raises the possibility that Russia might have used inside information from the campaign as part of its effort to interfere with the election on Trump’s behalf.

The accusation could be important evidence in Mueller’s ongoing probe into potential coordination between the Trump campaign and the Kremlin.

The information was accidentally revealed in a defense filing Tuesday and was meant to be redacted. The Associated Press was able to review the material because it wasn’t properly blacked out.

Manafort was among the first Americans charged in Mueller’s investigation and has been among the central characters in the case, having led the campaign during the Republican convention and as, U.S intelligence officials said, Russia was working to sway the election in Trump’s favor. Manafort has pleaded guilty to conspiracy charges in Washington and faces sentencing in a separate case in Virginia.

The defense filing was aimed at rebutting allegations that Manafort intentionally lied to Mueller’s team after agreeing to plead guilty last September. Prosecutors said Manafort breached their plea agreement by lying, but defense lawyers argued that any misstatements were simple mistakes made by a man coping with illness, exhaustion and extensive questioning from investigators.

The defense lawyers said Manafort suffers from depression and anxiety, has had little contact with his family and, on days when he met with investigators, was awakened before dawn to have hours-long interviews with little time to prepare for the questioning.

“These circumstances weighed heavily on Mr. Manafort’s state of mind and on his memory as he was questioned at length,” the lawyers wrote.

Tuesday’s filing revealed the first extensive details of what he is accused of having lied about. A spokesman for Manafort’s defense team declined to comment on the incomplete redactions or on Mueller’s allegations, but lawyers later filed a corrected version of the document.

The filing contains new information about Manafort’s connections to Konstantin Kilimnik, a Russian-Ukrainian business associate who was indicted last year on charges he tampered with potential witnesses. The U.S. believes he is connected to Russian intelligence, but Kilimnik, who is not in U.S. custody, has denied those ties.

The latest allegations further detail how Manafort’s work on the campaign intersected with his past international work with Kilimnik.

Emails previously reported by the AP and other news outlets show that in July 2016, Manafort told Kilimnik he was willing to provide “private briefings” about the Trump campaign to Oleg Deripaska, a Russian billionaire with ties to Russian President Vladimir Putin. Manafort dangled the briefings as he was mired in a dispute with Deripaska over a multimillion-dollar deal involving a Ukrainian cable company.

Through his spokesman, Manafort has acknowledged discussing the briefings but said they never occurred.

In addition, the defense document discloses a meeting in Madrid between Manafort and Kilimnik. Prosecutors say Manafort acknowledged the meeting only after being told that they were in the same city on the same day. Manafort spokesman Jason Maloni said Tuesday the Madrid trip mentioned in the filing occurred in January or February 2017— months after Manafort was ousted from the campaign and as Trump was taking office.

Manafort also did not initially disclose having earlier discussed a Ukraine peace plan with Kilimnik on more than one occasion during the campaign, according to the filing. Russia and Ukraine have been locked in a conflict since 2014 over Russia’s annexation of Crimea. The U.S. and European Union have imposed sanctions on Russia over that move as well as the country’s support for separatist rebels in eastern Ukraine.

Manafort’s attorneys don’t specify the details of the peace plan but they write that Manafort told prosecutors in September that “he would have given the Ukrainian peace plan more thought, had the issue not been raised during the period he was engaged with work related to the presidential campaign.

“Issues and communications related to Ukrainian political events simply were not at the time forefront of Mr. Manafort’s mind during the period at issue and it is not surprising at all that Manafort was unable to recall specific details prior to having his recollection refreshed,” they said.

They said the same about his recollection of sharing polling data with Kilimnik related to the campaign.

Prosecutors have also accused Manafort of lying about his contacts with Trump administration officials, which defense lawyers deny.

The filing says that a May 26, 2018, text message exchange with Manafort involved an unidentified “third-party” who was asking permission to name-drop Manafort if the person met with Trump. The request to use Manafort as an introduction to Trump came while Manafort was under indictment in two federal cases.

The defense lawyers said Mueller’s team has indicated they would not pursue additional charges against Manafort. The lawyers said they don’t want a separate hearing before a judge on the lying allegations but would address them instead during the sentencing process. /kga