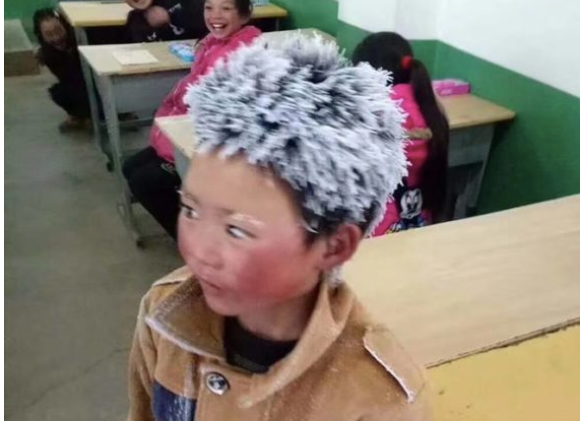 Nine-year-old Wang Fuman shot to fame as he was pictured having icicles in his hair for walking 4.5 kilometers to reach school. His family now lives in a two-story house, and he now only gets to walk 10 minutes to his new school.  Image: Facebook/People’s Daily China

Wang Fuman’s  life got better after a year of reported troubles.

The 9-year-old boy, more popularly known as China’s “Ice Boy,” shot to fame for walking 4.5 kilometers in the freezing cold just to attend school. Now he lives in a new, two-story home in the Zhuanshanbao village—very far from the muddy and isolated place he and his family previously lived, as reported by People.cn via The South China Morning Post last Saturday, Jan. 5.

“Life is much better,” Fuman’s father, Wang Gangkui, was quoted in the report. “Compared with the mud walls and muddy road [where they used to live], we are much better sheltered from the wind and rain.”

Gangkui now works at a construction site in Kunming, the capital of Yunnan province, and earns around 200 yuan (around P1,500) a day.

Fuman can expect no icicles in his hair anymore, as it only takes him only 10 minutes to walk to his new school. And despite the attention he received, the deputy principal of Zhuanshanbao Primary School, Fu Heng, said the boy remained hardworking.

“He is in the top three for mathematics and the top five overall,” the principal said. “He also has a good relationship with the other pupils.”

Fuman’s situation back then sparked a wave of donations, which was used for improvements in his new school, such as the new art room and the upgraded canteen.

And for those who live far away from the school, a dormitory has been built—with quilts that are “extra thick”—and is free of charge.

“All the attention [they, Fuman’s family, have received] has made the pupils feel the wonder of the world and their ideas have changed a great deal,” Fu said in the report.

Although a year has passed, Fuman’s dream is still the same–to be a police officer so he can “catch the bad guys.”  Katrina Hallare /ra