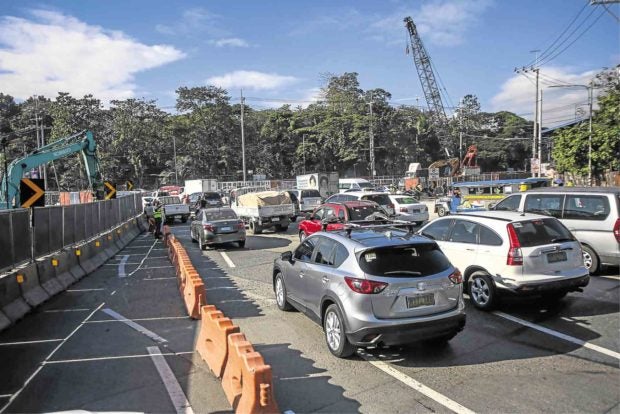 BUMPER TO BUMPER Motorists are caught by surprise by the sudden closure of a portion of Elliptical Road. —Photo courtesy of the MMDA

The Metropolitan Manila Development Authority (MMDA) on Tuesday ordered the contractor of the ongoing Metro Rail Transit (MRT) 7 project to suspend construction on segments of Elliptical Road in Quezon City after the latter unilaterally closed down two lanes on Monday.

Roberto Almadin, MMDA assistant general manager for operations, also imposed a P25,000 fine on EEI Corp., part of the consortium for the engineering of the P63-billion project, and asked it to submit an explanation for its failure to coordinate with the agency.

Motorists complained that even the U-turn slots on the busy thoroughfare were also closed.

At least five of the 14 stations of the MRT 7, which will run from San Jose del Monte in Bulacan province to North Avenue in Quezon City, will be located on Commonwealth Avenue.

But even before EEI’s closure of a portion of Elliptical Road, commuters had been complaining of heavy traffic in the area due to the ongoing construction of the new train line.

As a result, the MMDA ordered the reopening of the two lanes starting on Wednesday afternoon, Pialago said.

It also directed the creation of a new U-turn slot at the southern end of Commonwealth Avenue so motorists would not have to merge with other vehicles on Elliptical Road.