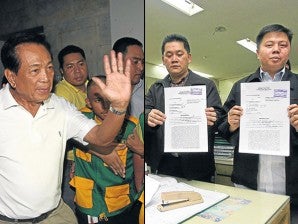 It was a race against the clock in the sala of Judge Jesus Mupas.

Hours before the Comelec beat the day’s 4:30 p.m. deadline for filing cases in the RTC, Abalos rushed to the court to show that he did not intend to hide when the anticipated criminal case against him was filed.

Abalos explained that his legal team intended to file timely manifestations to block an arrest warrant against him, and probably avoid suffering the same fate that Arroyo did. She is now under hospital arrest.

“The strategy of my lawyers was to file an appropriate motion before an arrest warrant is released,” said Abalos, who was accompanied by his wife and children, led by Mandaluyong Mayor Benhur Abalos.

At 4:15 p.m., Comelec representatives led by spokesperson James Jimenez proceeded to the RTC’s office of the clerk of court to file the charges of two counts of electoral sabotage against Abalos, election supervisor Yogie Martirizar and military Captain Peter Reyes.

The charges stemmed from allegations of poll fraud in North and South Cotabato province during the 2007 senatorial elections. Abalos was said to have ordered Comelec officials there to ensure a 12-0 sweep of Arroyo candidates in the balloting, according to the poll agency lawyers.

But Clerk of Court Marivic Tibayan insisted that once the clock struck 4:30 p.m., no filings would be received by the RTC as court offices were due to close by that time.

Representatives from the Comelec law department arrived 10 minutes after Jimenez’s group, carrying thick batches of documents comprising the evidence and the charge sheet against Abalos.

Asked why the filing seemed to be done at the last minute unlike during Arroyo’s case, Jimenez explained that preparing cases “take time and this time, it took all day” for the law department to complete the filing.

“We’re glad that we made it,” Jimenez told reporters. “Our people prepare the cases carefully to make sure it’s airtight.”

The case was immediately raffled off to a branch via a computer and to everybody’s surprise, the charges fell on the lap of Mupas of the Pasay City RTC Branch 112.

“Recount! There should be a recount,” the Philippine Daily Inquirer overheard a person inside the office exclaiming, eliciting laughter from Comelec representatives, members of the media and court workers.

Judge gone for the day

Abalos proceeded to Mupas’ sala but the judge had already left for the day.

When the Arroyo case fell on his lap last month, Mupas, who had been reprimanded for sitting on cases before him, decided in three hours that there was probable cause to charge the former President and now a Pampanga representative.

Mayor Abalos said the court would be setting a hearing for a motion for  determination of probable cause, which was immediately filed. The tact is similar to the one taken by Arroyo’s lawyers.

Brigido Dulay, one of the elder Abalos’ lawyers, explained that the legal team asked the court to evaluate whether the complaint prepared by the joint Comelec-Department of Justice panel validly established his client’s probable cause.

In filing the pleading, the legal team would first seek a hearing on their motion where prosecutors and defense lawyers were expected to argue about their stands.

Mayor Abalos shrugged off any notion that his father would flee, given his age. Abalos is 77. “If he flees, put me in jail and remove me as mayor,” he said.

Outside the court, on the City Hall quadrangle, hundreds of Abalos supporters massed, dressed in white, cheering for the former Comelec chairman who also had served as mayor of Mandaluyong.

At a rally in Mandaluyong earlier, Abalos said he had been waiting to clear himself in the courts. “Justice must be served,” he said, denying any wrongdoing. With reports from Jerome Aning and Marlon Ramos