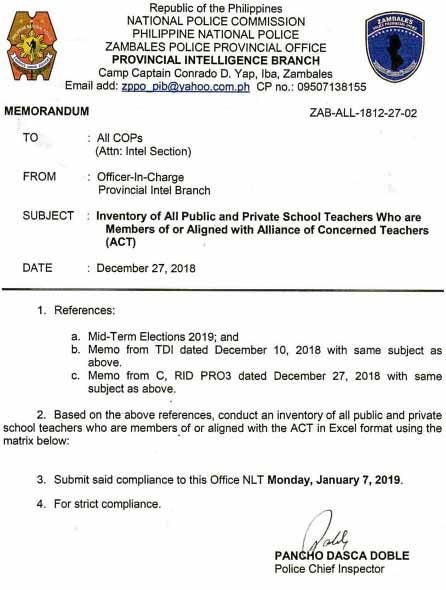 INTELORDER Amemorandum issued by Chief Insp. Pancho Dasca Doble, acting head of the Zambales police intelligence unit, on Dec. 27, 2018, orders his subordinates to conduct an inventory of all public and private school teachers “who are members of or aligned” with the Alliance of Concerned Teachers. —PHOTO COURTESY OF ACT

The Philippine National Police has confirmed reports that it is profiling members of the Alliance of Concerned Teachers (ACT), a group critical of the Duterte administration, drawing an outcry from rights and lawyers organizations.

PNP Director General Oscar Albayalde on Monday sacked three police intelligence officers, not for the profiling of ACT members but for their “scary” method of intelligence gathering.

“You have to do a good job discreetly,” he added.

The relief of intelligence officials from the Santa Cruz, Manila, police station; Batasan, Quezon City, police station; and another in Zambales province came following complaints by ACT over the weekend that the PNP was openly profiling its members.

In Manila, at least six public elementary and high schools had been visited by police officers, some reportedly in civilian clothes.

Information gathering has been reported, too, in other provinces, including Bulacan, Sorsogon, Camarines Sur and Agusan del Sur.

“They want to justify and normalize surveillance,” ACT secretary general Raymond Basilio told the Inquirer. “We have the right to live freely and what they are doing does not fall under ‘normal.’”

Human rights and lawyers’ groups denounced the PNP’s insistence on the legality of its collection of information on members of ACT, which they said was sowing more fear given the political climate under the Duterte administration.

The Commission on Human Rights (CHR) said the PNP had violated the ACT members’ constitutional rights to privacy and association.

CHR spokesperson Jacqueline Ann de Guia said in a statement on Sunday that reports that the PNP was profiling public and private school teachers were “alarming.”

The National Union of Peoples’ Lawyers (NUPL) said coming up with the “inventory”—though deemed harmless by police officials—should be seen in the larger context of the crackdown on activists and opposition leaders.

Karapatan secretary general Cristina Palabay expressed fear that the profiling would lead to prosecution, arrests and even killings, given the trend of “Red-tagging” under the Duterte administration.

“The recent Red-tagging [of] ACT Rep. France Castro and this recent incident come to more than mere coincidence,” Palabay said in a statement.

In November last year, Castro was arrested, along with former Bayan Muna Rep. Satur Ocampo and 16 others, at a checkpoint in Talaingod, Davao del Norte province, for alleged “lumad” (indigenous) child trafficking.

ACT Davao City president Elenito R. Escalante said his group was a legitimate union of teachers recognized by the Department of Education (DepEd) and other government agencies.

“Our championing of the rights and welfare of teachers is no crime,” Escalante said.

In a rally at the Camp Crame gates on Monday, ACT national chair Benjie Valbuena said the group first learned about the operations after police officers went to Cecilio Apostol Elementary School in Manila on Thursday.

The police officers asked school officials to fill out a “survey form” seeking an “inventory” of ACT members on the faculty and informing the school about the police operation.

A teacher took a photo of the “form” and reproduced it for ACT.

The form was a memorandum from the intelligence chief of the Santa Cruz police station ordering the policemen to “conduct an inventory of all public and private school teachers who are members aligned with the ACT.”

The memo showed an example of the database format to be used and cited other memorandums purportedly coming from the Metro Manila regional intelligence division and the “midterm elections of 2019.”

A new party-list group called ACT-CIS is accredited for the May elections. Its top nominee is Erwin Tulfo, a supporter of President Duterte.

Amid the uproar, the DepEd has ordered the recall of a letter addressed to school heads by the Schools Division Office in Manila that endorsed the PNP memo.

At the press conference, Albayalde said the gathering of information was not limited to ACT members.

The PNP chief said the intelligence officers focused on ACT to determine whether it was doing something wrong like supporting armed rebellion.

Escalante likened the PNP move to the government’s anti-illegal drug campaign “tokhang,” a combination of two Visayan words—“toktok” (knock) and “hangyo” (ask)—in which drug suspects are subject to profiling.

The PNP has been criticized since the beginning of the administration’s crackdown on illegal drugs after it came up with “drug watch lists” considered a target list for extrajudicial killings. —WITH A REPORT FROM VINCE F. NONATO