Robredo: No problem with ‘Leni’ as typhoon name 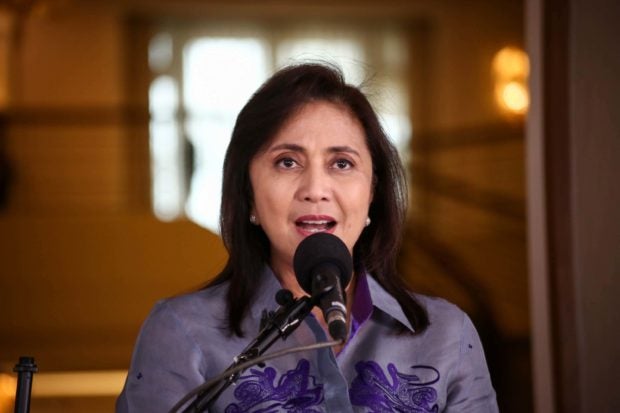 MANILA, Philippines — Vice President Leni Robredo has no problem with suggestions that a storm should be named after her.

In a radio interview on Sunday, Robredo said that what is more important is the country’s preparedness for natural calamities such as typhoons, and the its response to such incidents.

Robredo’s statement was in response to President Rodrigo Duterte’s jokes last week, during a command conference in Pili, Camarines Sur.  He said that storms should have names such as “Bernadette, Leonora, or Leni,” instead of “Usman,” which ravaged through the eastern parts of the country before 2018 ended.

Duterte expressed displeasure at the name “Usman,” as it was the name of his Maranao friend.

The President also said that he will prioritize giving aid to the Bicol Region, because Robredo — who hails from Naga City in Camarines Sur — is “beautiful.”

“You know the reason that I gave you priority in the projects is that you have a very beautiful Vice President here… Leni. Tell her she’s really beautiful,” he said.

Robredo said that while it is a welcome compliment, what is important for them is the government’s actions for typhoon and landslide victims.

According to latest numbers from the National Disaster Risk Reduction Council (NDRRMC), the death toll due to Usman had climbed to 126, with 26 people still missing.

Last week, Robredo and Duterte made separate trips to the region to visit residents of typhoon-stricken areas.  Robredo, in particular, called on government agencies to study implement stricter regulations regarding building along landslide-prone areas. /je