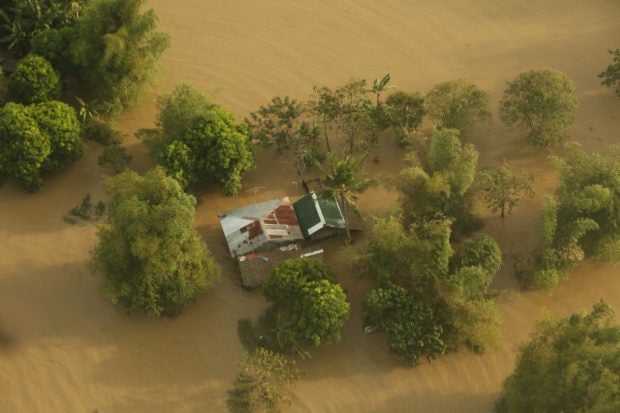 STATE OF ISOLATION Widespread flooding bought about by Tropical Depression “Usman” isolated these houses in Camarines Sur province. Officials say many people were reluctant to leave their homes during the Christmas holidays. —MALACAÑANG PHOTO

The number of fatalities from Tropical Depression “Usman” has risen to 126, mostly from landslides caused by torrential rains, according to the National Disaster Risk Reduction and Management Council (NDRRMC).

The death toll is likely to climb further with 26 people still missing, it said.

Damage to agriculture and infrastructure exceeded P4.2 billion as Usman raked the central and eastern parts of the country on Dec. 29 and caused massive flooding.

Of the reported fatalities, 109 were in Bicol, according to disaster officials.

While Bicol is often hit by deadly typhoons, many people failed to take necessary precautions because the storm was not strong enough to be rated as a typhoon under the government’s storm alert system, according to civil defense officials.

Officials also said many people were reluctant to leave their homes during the Christmas holidays.

“In two days alone, Usman poured more than a month’s worth of rainfall in the Bicol region,” NDRRMC spokesperson Edgar Posadas told Agence France-Presse (AFP), using the local name for the storm that had weakened into low pressure.

“Our search and retrieval operations are going on but the sticky mud and the unstable soil are a challenge,” Posadas said.

More than 152,000 people were displaced by the storm and 75 were injured, according to the national disaster agency.

President Duterte visited Camarines Sur province on Friday and urged officials to build evacuation centers instead of using schools as shelters for the displaced.

As of Sunday, the NDRRMC said only eight of the 126 reported deaths had been confirmed while the rest were still being verified.

The NDRRMC pegged damage to infrastructure in Bicol, Eastern Visayas, Mimaropa and Calabarzon at P3.3 billion, and to agriculture at P900 million.

Hardest hit was Bicol, which suffered P2.9 billion in damage to agriculture and infrastructure.

In Calabarzon, damage to infrastructure was placed at P96 million and none to agriculture.

In Mimaropa, damage to both agriculture and infrastructure was estimated at P991.6 million, and in Eastern Visayas, P214.75 million.

Amid the destruction, the local governments of the provinces of Albay, Sorsogon, Camarines Norte, Camarines Sur and Oriental Mindoro, including Calapan City, have declared a state of calamity.

The town of Bulan in Sorsogon, as well as the municipalities of Baco, Naujan, Socorro, Pola, Pinamalayan, Bansud and Bongabong in Oriental Mindoro have made similar declarations.

People affected by destructive typhoons last year will benefit from a measure extending the availability of unused funds in the 2018 budget until the end of 2019, according to Sen. Loren Legarda.

Ordinarily, such unused funds would be reverted to the unappropriated surplus of the general fund, Legarda, chair of the Senate finance panel, said in a statement.

“[W]ith the President’s signing of the joint resolution, agencies will be able to use what remains of the 2018 budget to fund priority projects, as well as for aid and relief activities, and maintenance, construction/repair and rehabilitation of schools, hospitals, roads, bridges and other essential facilities of the national government,” she said.

The President signed the measure on Dec. 28. The measure extended only appropriations for maintenance and other operating expenses and capital outlay.

Congress failed to pass the proposed P3.8-trillion budget for 2019 in December due to delays and standoffs over allegations of pork insertions.

This has resulted in a partially reenacted budget, meaning no new appropriations are being funded.

The two chambers of Congress will resume session on Jan. 14 with the Senate intent on passing and ratifying the budget before it goes on another break in February. —JEANNETTE I. ANDRADE AND DJ YAP, WITH A REPORT FROM AFP