Several Manila streets to be closed to traffic on Jan. 7, 8 and 9 for feast day celebration
By: Matthew Reysio-Cruz, Melvin Gascon - @inquirerdotnet
Philippine Daily Inquirer / 05:08 AM January 07, 2019 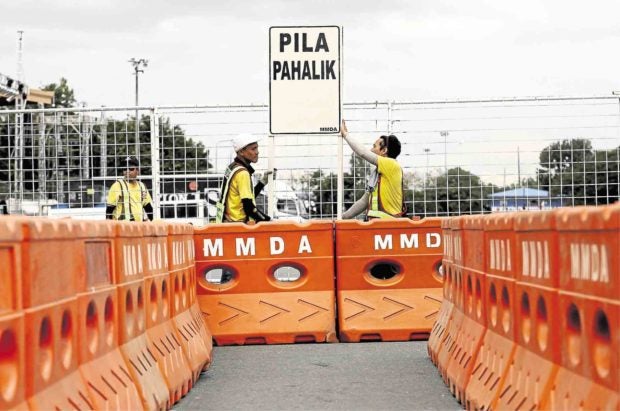 ‘PAHALIK’ PREPARATIONS Plastic barriers and signs are in place for the traditional pahalik to be held on Jan. 8 at Quirino Grandstand in Rizal Park. Many devotees believe that if they touch and kiss the image of the Black Nazarene, their wishes will be granted. —RICHARD A. REYES

An environmental watchdog has asked politicians not to turn the annual Feast of the Black Nazarene on Jan. 9 into an opportunity to campaign.

“We urge our politicians to show respect for the time-honored commemoration of the ‘traslacion’ by not putting up tarpaulins and distributing leaflets and other promotional materials which will only turn into ugly litter,” said Daniel Alejandre, EcoWaste Coalition’s Zero Waste campaigner.

In a statement, he appealed to “epalitikos” — a term referring to “traditional politicians seeking attention” — to restrain themselves in the absence of a law that bans premature campaigning.

EcoWaste expressed concern that leaflets and tarpaulins distributed by politicians would add to the garbage dumped along the procession route.

Alejandre said that based on the data of the Manila City government, 385 tons of mixed trash were collected last year between Quirino Grandstand in Rizal Park and the Quiapo district during the traditional “pahalik” and the 6-kilometer procession compared to 341 tons in 2017.

Commission on Elections spokesperson James Jimenez supported EcoWaste’s appeal as he urged politicians not to engage in premature campaigning during the religious event.

“We urge all candidates not to campaign outside the official campaign period, and to be always mindful of the environmental impact of their campaigning activities,” he said.

To make way for the millions of devotees expected to join the procession, the Traffic Enforcement Unit of the Manila Police District (MPD) will close several roads on Jan. 8 and 9.

Starting at 10 p.m. on Jan. 8, no vehicles will be allowed on Katigbak Drive and South Drive (one lane accessible to Manila and H2O Hotel); the northbound lane of Quezon and McArthur Bridge from Bonifacio Shrine onward; and the stretch of Taft Avenue from Ayala Boulevard to Bonifacio Shrine.

Northbound vehicles intending to use the portion of Roxas Boulevard from T.M. Kalaw Street to P. Burgos Street should turn right on T.M. Kalaw Street, left to Orosa Street heading toward Intramuros, then left on A. Soriano Avenue.

In 2018, it took devotees 23 hours to make the 6.1-km trek from Quirino Grandstand to Quiapo Church.

The southbound lane of Quezon Boulevard (Quiapo) from A. Mendoza/Fugoso to Plaza Miranda and the westbound lane of España Boulevard from P. Campa to Lerma Street will also be closed by 11 a.m. today to prepare for the Blessing and Replica Procession.