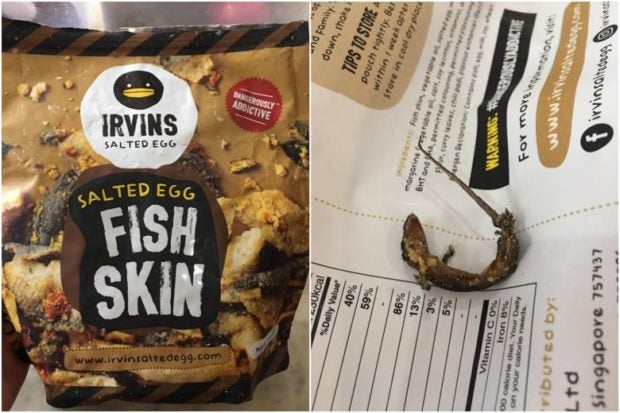 SINGAPORE — Singapore-based food company Irvins Salted Egg is offering refunds for batches of its popular snack after a Bangkok customer found a dead lizard coated with salted egg in a packet.

Irvins Salted Egg, which has at least 13 outlets in Singapore, Hong Kong and the Philippines, manufactures all its products in Singapore. Locals and tourists often stand in line to snap up its products, which come with a “dangerously addictive” label on its packaging.

Jane Holloway, 38, who lives in Bangkok, said in a Facebook post last Saturday (Dec 29) that her mother and brother had eaten half the bag of Irvins Salted Egg Fish Skin before they discovered the dead reptile.

Describing it as “so disgusting”, she wrote: “How can this happen? This gecko was probably deep fried with the salmon skin by the looks of it. Eeeewwww!”

Speaking to The Straits Times on Wednesday, Ms Holloway said that she bought the product in Bangkok in early November from international supermarket Villa Market at K Village in the Khlong Toei district.

Her Thai mother, who also lives in Bangkok, opened the packet last week to enjoy the snack with her Siem Reap-based brother, who was visiting them over the Christmas and New Year holidays. Her father is Australian.

Her brother had initially thought the dead lizard was a baby salmon fish head.

OMG I can’t believe IRVINS Salted Egg is not purely salmon fish skin but also gecko! My poor brother and mum ate half…

Ms Holloway, who works at the Thailand Institute of Justice, said that she has bought the snack several times for her family and her colleagues.

“It’s also really expensive here at 700 baht (S$29) a packet,” she said, adding that it was one of her favorite snacks.

In Singapore, a small packet of the salted egg fish skin snack weighing 105g retails for $8, while a big packet at 230g costs $16. The one Ms Holloway bought was a big packet.

On Wednesday, Irvins Salted Egg founder Irvin Gunawan said in a statement that the company is “shocked and devastated” to hear about the incident.

“We really want to sincerely apologize to the customer and everyone who is affected by this incident directly or indirectly. We take full responsibility for the goods that we sell and everything in it,” he said.

He added that quality control is one of the most important aspects of the company and said that he has since personally contacted Ms Holloway about the incident and will also be keeping in touch with her.

The case has been reported to the Agri-Food and Veterinary Authority (AVA) and the company will cooperate fully in its investigations, he said.

“We promise to make the necessary changes in our production to ensure this will never happen again,” he added, noting that the company will also investigate the matter further as it does not have a full explanation on how the dead lizard ended up in the snack.

An AVA spokesman said it has received feedback on the incident and is investigating.

In an e-mail response to Ms Holloway’s brother seen by The Straits Times, Gunawan had offered the family a refund for the snacks and the cost of any medical bills arising from the incident.

He also said the company, which started in a cafe in Jalan Leban, had in December moved to a new production facility, where “our hygiene and checking procedures are much, much stricter”.

The company’s new production facility is in JTC Food Hub in Senoko Drive. It did not say where its previous facility was located, when asked. Two addresses are listed on the packet containing the lizard: one in Admiralty Street, and the other in Senoko South Road.

While none of her family members have fallen ill from eating the snack so far, Ms Holloway said they are “definitely traumatized”.

She added: “Mum says she feels like throwing up when she thinks about it.”

In Wednesday’s statement, Mr Gunawan said that customers with salted egg snacks expiring on Oct 16 this year should e-mail [email protected] to return the product and receive a refund.

Customers who are uncomfortable eating any Irvins Salted Egg snack should do the same as well. All recalled products would be disposed of, he added.

Some netizens called for the authorities to take action in response to the incident.

Facebook user Mun Yong Wong wrote: “I hope the health authorities deal with this very strictly, as these items are also exported overseas and brought by tourists to their home countries. This will tarnish the name of Singapore if found abroad.”

However, others commended the company’s response to the situation.

Facebook user Wren Wren wrote: “Rather than avoiding this issue or trying to cover up any matters relating to this unfortunate incident, Irvins chose to face it, learn from it and move on to provide a better experience to all their customers. Kudos to them for being honest and genuine in business.”