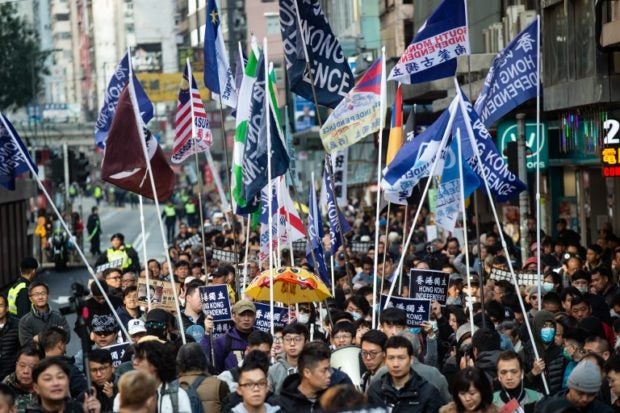 HONG KONG, China — Hong Kong’s embattled democracy advocates kicked off 2019 with a large street rally on Tuesday, lamenting what they said had been a grim year for freedoms and steeling themselves for fresh battles with Beijing.

A thousands-strong crowd — including a small retinue of independence activists — protested over disappearing political freedoms, rising inequality and the local government’s perceived coziness with big business and Beijing.

Semi-autonomous Hong Kong currently enjoys liberties unseen on the mainland including freedom of expression and the press under a deal struck with Britain before the 1997 handover.

But concern is growing that those rights are being eroded by an increasingly assertive China ruled by President Xi Jinping.

Last year city authorities made a series of unprecedented moves that caused alarm among activists and prompted rare criticism from western governments.

In September a tiny pro-independence political party was banned under an obscure national security law designed to target triad gangs.

Soon after a Financial Times journalist who chaired a talk with that party’s leader at a press club found himself effectively expelled after officials refused to renew his visa.

“We have experienced a lot in 2018 — society, politics and people’s livelihood have all regressed. I can’t see hope in 2019,” protester Kwan Chun-pong, a 47-year-old production line manager, told AFP.

The majority of Hong Kong’s democracy advocates want people to have a greater say in how their city is run, such as the ability to directly elect their leader.

Mass pro-democracy demonstrations in 2014 blockaded parts of the city for 79 days but failed to win any meaningful concessions.

Although most Hong Kongers do not advocate independence — a red line with Beijing — a small group of hardline independence activists emerged from the failure of the 2014 protests, rattling local and mainland authorities.

A few dozen independence activists — some of them masked — attended Tuesday’s rally, followed by police officers with video cameras.

“We are still coming out today because we still love this place, we want it to change, we want the next generation to feel proud of Hong Kong’s identity,” activist Wayne Chan shouted through a loud-hailer.

Police said some 3,200 people attended the march at its peak, while organizers gave a higher figure of 5,500.

The Hong Kong government rejects the suggestion that rights are slipping and says campaigning for independence contravenes the city’s mini-constitution.

The Civil Human Rights Front, which organized Tuesday’s march, does not support independence but argues the city’s free speech laws should allow others to campaign for it.

A number of 2014 protest leaders will also find out in April whether a court will jail them after they were prosecuted under a slew of little-used public order offenses. /ee