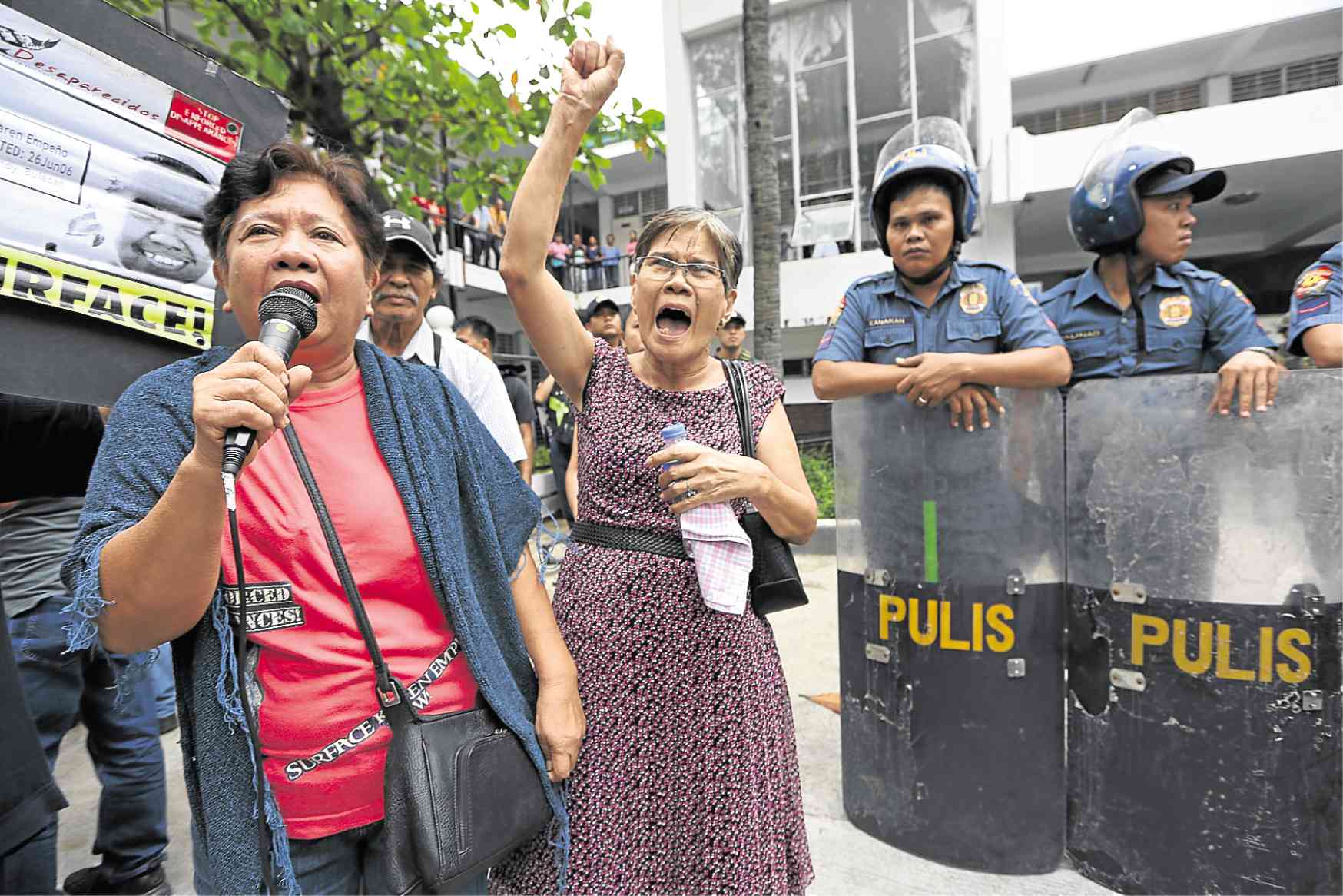 ANGUISH AND DESPAIR Concepcion Empeño (left) and Erlinda Cadapan are hoping that no parent would suffer the anguish and despair that they faced when their daughters, Karen and Sherlyn, both University of the Philippines students, disappeared in 2006.

CITY OF MALOLOS—For almost seven years, Concepcion Empeño and Erlinda Cadapan sat patiently at a Bulacan courtroom for the trial of retired Army Maj. Gen. Jovito Palparan Jr., who was charged with kidnapping and illegal detention along with Lt. Col. Felipe Anotado, S/Sgt. Edgardo Osorio and M/Sgt. Rizal Hilario (who remains at large).

The mothers of missing University of the Philippines (UP) students Karen Empeño and Sherlyn Cadapan quietly absorbed every testimony, every detail that could shed light on their daughters’ abduction in 2006.

Occasionally, the sessions in the trial that started in 2012 would get heated; often they were long, tedious and complicated. But Empeño and Cadapan stayed until the proceedings were terminated for the day. To the public, the two represented Filipinos who would brave anything to learn the fate of their missing loved ones.

The moment Palparan was convicted and sentenced to life imprisonment on Sept. 17, the news media focused on the outrage of the retired military general whose reputation as a fierce anticommunist hunter earned him the moniker “The Butcher” (“berdugo,” or executioner) from activist groups.

Scant attention was given the two mothers who sat weeping after hearing the verdict.

Empeño said she hoped no one would suffer the anguish and despair they faced each day.

Palparan may have been found guilty and face a lifetime in prison, but the trial itself failed to make the soldiers reveal the whereabouts of their daughters, much less say if they were still alive.

The disappearance of their daughters had changed their lives, she said.

“Ever since Karen and Sherlyn went missing, our lives have become abnormal—mentally, emotionally, socially and financially,” Empeño told the Inquirer.

She actively joined protest rallies, supported human rights activities and even traveled to Europe to talk about human rights issues in the country.

Empeño also served as chair of Desaparecidos, a group composed of relatives of those who had disappeared during and after martial law. In 2016, she ran for a seat in the municipal council of Masinloc town in Zambales province, but lost.

Empeño was a home economics graduate who became a teacher and principal of Collat Elementary School in Masinloc. She retired in 2015 after serving the government for 30 years.

When she turned 68 on July 23, she said she spent the day thinking about Karen, whose birthday was a day earlier. Karen, the third among five siblings, would have been 34, she said.

Her husband, Oscar, is a retired bank employee.

“I wish that my family would again enjoy life the way we did before,” said Cadapan, who still attends human rights events despite her poor health. Life after Palparan, she said, would allow her more time for mushroom production and consultancy work.

An agriculture graduate from UP in Los Baños, Laguna, Cadapan worked for 10 years as research assistant and later, as research associate. Sherlyn is the second of her five children.

Her husband, Asher, is a retired field assistant of the International Rice Research Institute in Laguna.