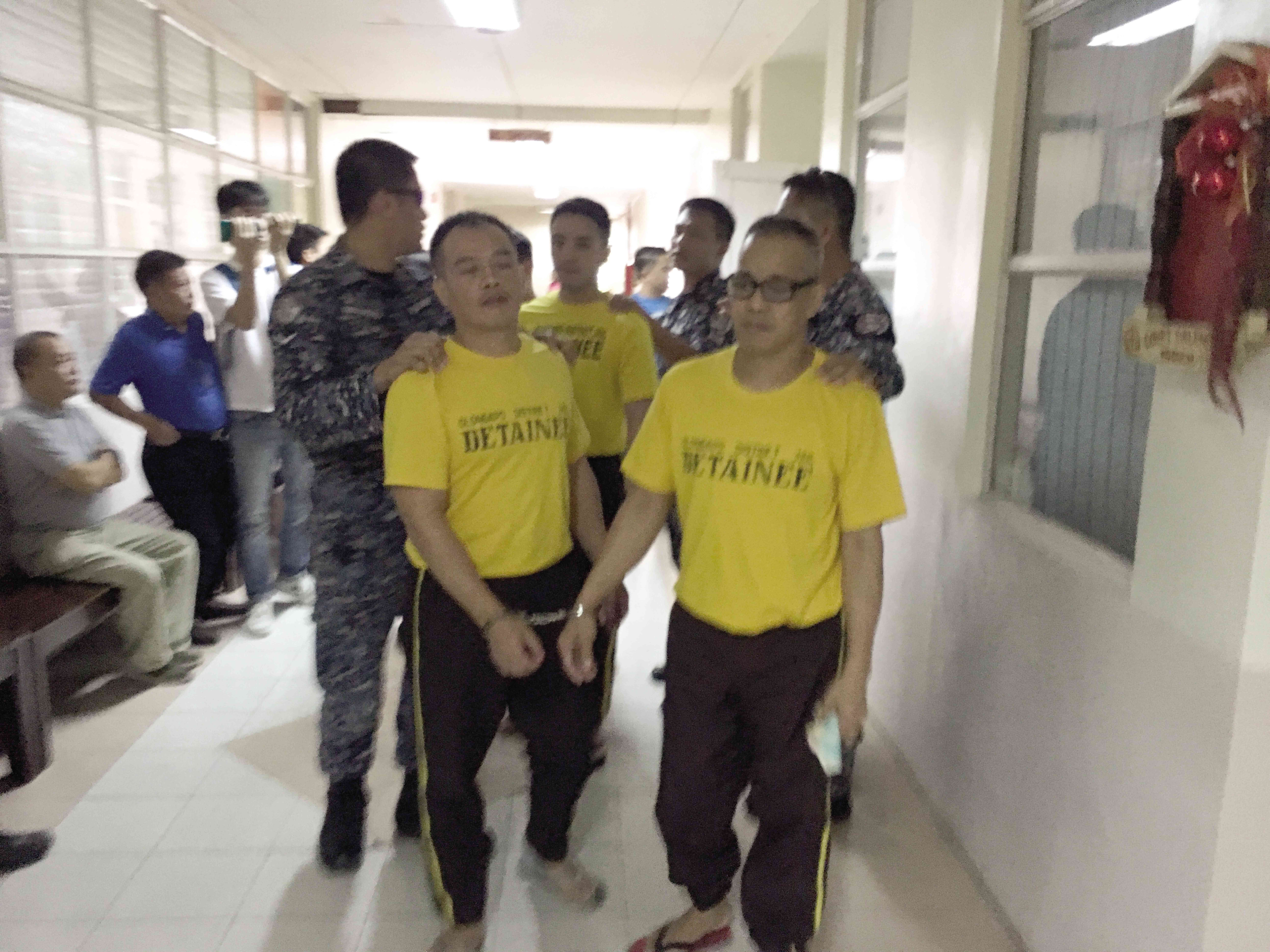 GUILTY Four Chinese nationals are escorted by policemen after a court in Olongapo City found them guilty of drug possession on Dec. 14. ALLAN MACATUNO

The Department of Justice (DOJ) has asked the Olongapo City Regional Trial Court (RTC) to reverse a portion of its Dec. 14 decision that acquitted four Chinese nationals of manufacturing illegal drugs.

The Olongapo RTC Branch 74, in the same decision, sentenced the four Chinese to life imprisonment for possession of about 500 grams of “shabu” (crystal meth).

In a motion filed on Friday, the DOJ said the court should have recognized that the accused were arrested in a “floating shabu laboratory” off Subic town, Zambales province, two years ago.

The four Chinese—Win Fai Lo, Shu Fook Leung, Kam Wah Kwok and Kwok Tung Chan—were arrested by agents of the Philippine Drug Enforcement Agency (PDEA) on board a boat that they tried to pass off as a fishing vessel on July 11, 2016.

The DOJ disagreed with Judge Roline Jabalde’s finding that the four Chinese were not guilty of manufacturing illegal drugs supposedly because the hydrogenator found in the boat was “nonfunctional.”

In its decision, the court cited the prosecution’s failure to prove guilt beyond reasonable doubt.

“The presence of a laboratory equipment in the clandestine laboratory is only a prima facie proof of manufacture of any dangerous drug but not a proof beyond reasonable doubt that they are engaged in the manufacture of illegal drugs, particularly methamphetamine hydrochloride, or shabu,” it said.

But Senior Assistant State Prosecutor Juan Pedro Navera said the PDEA had explained that a hydrogenator was used solely to manufacture shabu, so its discovery in the boat was enough to convict the accused of illegal drug manufacturing.

“The law does not require that the laboratory equipment found in the clandestine laboratory must be operational,” Navera said.

He said the PDEA had explained that the hydrogenator was not functioning at the time of the arrest only because there was no hydrogen gas tank. The equipment, according to the PDEA, must have been used because there was a power source nearby.

The DOJ said the court should not have ignored the conclusion of the PDEA chemist.

“The court substituted its own lack of scientific expertise for the PDEA’s expert conclusion,” it said.