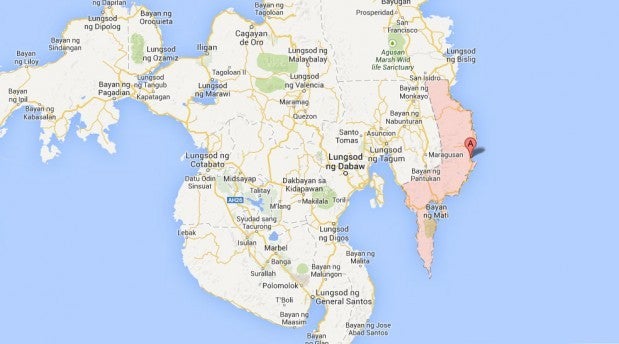 MANILA, Philippines—Another earthquake, with a magnitude of 5.6, struck off the coast of Davao Oriental following an earlier 7.2 quake, the Philippine Institute of Volcanology and Seismology (Phivolcs) said Saturday.

It noted that the earthquake was an aftershock of a previous quake which struck off the coast of Davao Oriental Saturday morning.

The earthquake, which was tectonic in origin, had a depth of 43 km.

Phivolcs said no aftershocks and damage are expected from this episode.

In areas closest to the epicenter of the previous earthquake (11:39 a.m. episode), residents living in coastal areas were told to move farther in land following the hoisting of a tsunami advisory by Phivolcs and other agencies, said Karen Deloso, Davao Oriental provincial information officer.
Gov. Nelso Dayanghirang has ordered key departments to closely work with mayors to monitor the water level of the coasts around the southeastern Philippine province, Deloso said in a statement.
She said no damage or injuries had been reported following the 11:39 a.m. temblor.
Moderate to large quakes are not rare in the Philippines, an archipelago that sits on the so-called Pacific Ring of Fire, a seismically active region due to colliding continental plates.
In August 1976, Mindanao was hit by a magnitude-7.9 quake that spawned tsunamis devastating a 600-kilometer long coastline and killed over 8,000 people.
In April 1924, an 8.3 quake also struck off Davao Oriental, also generating a tsunami.
In September this  year, at least 10 people were injured and several homes damaged when a magnitude-6.4 quake hit Manay town of Davao Oriental.