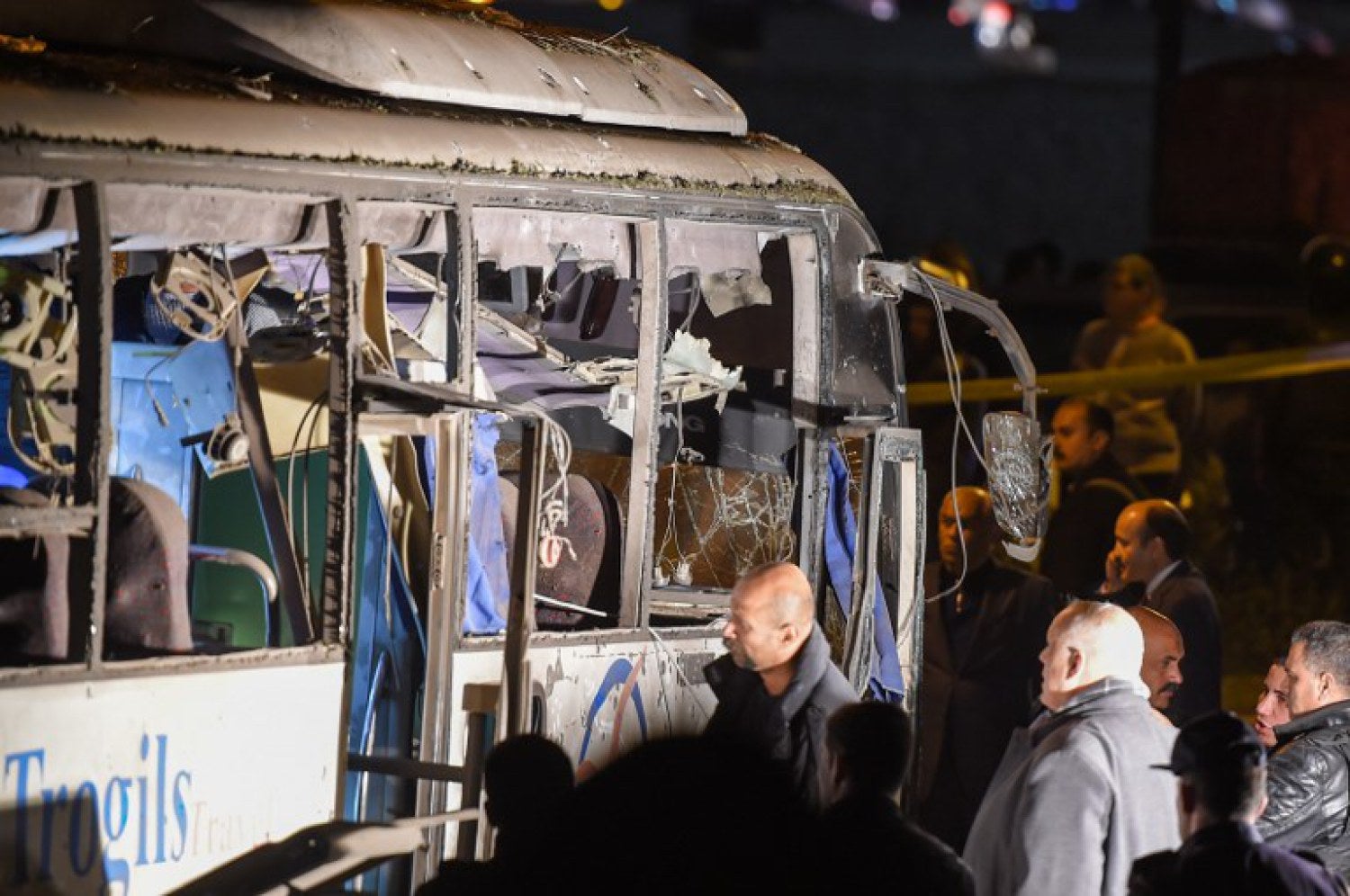 This picture taken on December 28, 2018, shows a tourist bus that was attacked in Giza province south of the Egyptian capital Cairo. Three Vietnamese tourists and an Egyptian tour guide were killed and 10 others wounded when a roadside bomb exploded near their bus as it traveled close to the Giza pyramids, Egypt’s interior ministry said in a statement.  AFP

GIZA, Egypt — Three Vietnamese holidaymakers and an Egyptian tour guide were killed Friday when a roadside bomb blast hit their bus as it traveled close to the Giza pyramids outside Cairo, officials said.

A statement by the public prosecutor’s office said 11 other tourists from Vietnam and an Egyptian bus driver were wounded when the homemade device exploded.

The improvised explosive device was placed near a wall along the Mariyutiya Street in Al-Haram district near the Giza Pyramids, it said.

The bus was carrying a total of 16 people including 14 Vietnamese tourists, an Egyptian driver and a tour guide, according to the statement.

Armed security personnel quickly deployed to the site and cordoned off the area for inspection.

The white tourist bus could be seen with its windows shattered and surrounded by soot-covered debris.

Prime Minister Mostafa Madbouli visited the injured tourists in hospital, where he announced that the tour guide had died from his wounds.

Madbouli urged against “amplifying” the incident as he insisted that “no country in the world can guarantee that its 100 percent safe”.

“It’s possible at times that an individual incident takes place here or there,” he told journalists.

“We have to know that it’s possible that it would be repeated in the future.”

There was no immediate claim of responsibility for the blast.

Later, a statement issued by the United States condemning the attack.

“We stand with all Egyptians in the fight against terrorism and support the Egyptian government in bringing the perpetrators of this attack to justice,” State Department spokesman Robert Palladino said.

Egypt’s tourism industry has been struggling to recover from terror attacks and domestic instability that has hit the country in recent years.

In July 2017, two German tourists were stabbed to death by a suspected jihadist assailant at the Egyptian Red Sea beach resort of Hurgada.

In October 2015, a bomb claimed by a local affiliate of the Islamic State group killed 224 people on board a passenger jet carrying Russian tourists over the Sinai peninsula.

That incident dealt a severe blow to Egypt’s tourism industry still reeling from the turmoil set off by the 2011 uprising that forced veteran leader Hosni Mubarak from power.

Egypt has since been seeking to lure tourists back and spur the lucrative sector by touting new archaeological discoveries and bolstering security around archaeological sites and in airports.

Tourism has slowly started picking up. The official statistics agency says tourists arrivals in Egypt in 2017 reached 8.2 million, up from 5.3 million the year before.

But that figure was still far short of the record influx in 2010 when over 14 million visitors flocked see the country’s sites.

Egypt has for years been battling an Islamist insurgency in North Sinai, which surged following the 2013 military ouster of president Mohamed Morsi.

Security forces have since February been conducting a major operation focused on the Sinai Peninsula, aimed at wiping out a local IS branch.

More than 450 suspected jihadists and around 30 Egyptian soldiers have been killed since the offensive began, the army said in October.

The pyramids of Giza are the only surviving structure of the seven wonders of the ancient world and a major tourist draw attracting visitors from across the globe. /cbb