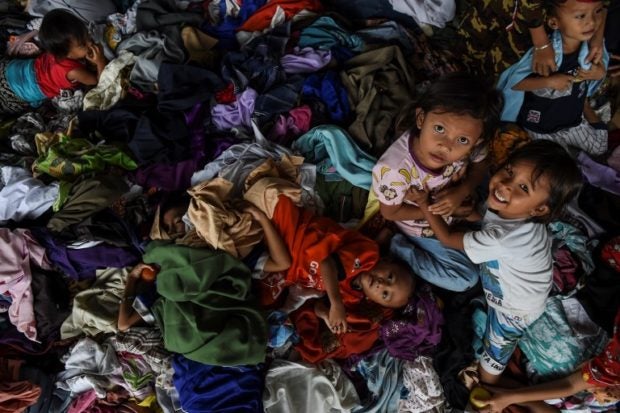 Children play on donated clothing at a relief centre after being evacuated from Sebesi Island in Kalianda in Lampung province on December 27, 2018. AFP

JAKARTA, Indonesia — The number of people evacuated after Indonesia’s deadly tsunami has nearly doubled to some 40,000 while more than 7,000 were injured in the disaster, officials said Friday, as they trimmed the official death toll.

Authorities said 426 people had been killed — down from a previous tally of 430 — with double-counting by different districts blamed for the change. Two dozen people remain missing almost a week after the disaster.

The fresh figures come a day after Indonesia’s disaster agency raised the danger alert level for an erupting volcano that sparked the killer tsunami at the weekend.

They have also warned that fresh activity at the crater threatened to trigger another deadly wave.

Previously, the number of displaced — including many left homeless — stood at 22,0000 but that figure has now jumped to just over 40,000, according to the latest tally.

Some 7,202 people suffered injuries, jumping from 1,495, while nearly 1,300 homes were destroyed as the waves crashed into the coastlines of western Java island and south Sumatra, authorities said.

“But it’s a last-ditch option because it’s not easy with limited space and people reluctant to move away.”

A no-go zone around rumbling Anak Krakatoa has been widened to five kilometers — up from a previous two kilometers — with residents warned to stay away from the coast.

The crater’s status has been raised to high alert, the second-highest warning on Indonesia four-point danger scale.
Flights are being redirected away from the area.

A section of the crater — which emerged at the site of the Krakatoa volcano, whose massive 1883 eruption killed at least 36,000 people — collapsed after an eruption and slid into the ocean, triggering Saturday night’s killer wave.

Before and after satellite images taken by Japan’s space agency showed that a two square kilometer chunk of the volcanic island had collapsed into the water.

Indonesia, a vast Southeast Asian archipelago, is one of the most disaster-hit nations on Earth due to its position straddling the so-called Pacific Ring of Fire, where tectonic plates collide.

The tsunami was Indonesia’s third major natural disaster in six months, following a series of powerful earthquakes on the island of Lombok in July and August and a quake-tsunami in September that killed around 2,200 people in Palu on Sulawesi island, with thousands more missing and presumed dead. /ee