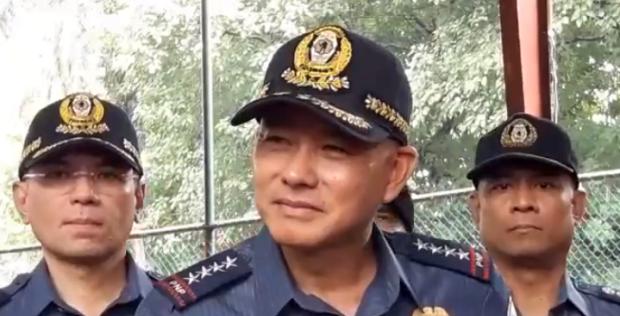 Director General Oscar Albayalde, center, gives a press briefing after a gift-giving event he led in Malate, Manila on Christmas Eve 2018. With him are Director Guillermo Eleazar, chief of the National Capital Region Police Office, and Senior Supt. Vicente Danao Jr., chief of the Manila Police District. (Photo from a PNP video posted on Facebook)

MANILA, Philippines — Even with the recent killing of an incumbent lawmaker and a former town mayor on the very same day, the peace and order situation nationwide is far better now, according to Director General Oscar Albayalde, chief of the Philippine National Police (PNP).

On the other hand, before the 2016 presidential elections there were 42 killings.

[We’re not saying, however, that just because the figures are low we will be lax. Of course, we don’t such killings to happen.]

[But compare that to the violent incidents that took place during the 2016 elections, especially from January to May 8, the number of incidents from October to December 23, 2018, are significantly lower.]

Albayalde made his assessment two days after the killing of Ako Bicol Rep. Rodel Batocabe and his police aide by six unknown assailants, after a charity event in Barangay Burgos, Daraga, Albay last Saturday afternoon.

Just hours earlier on the same day, Joelito Talaid, a former mayor of Kadingilan in Bukidnon, was killed in Cagayan de Oro. /atm