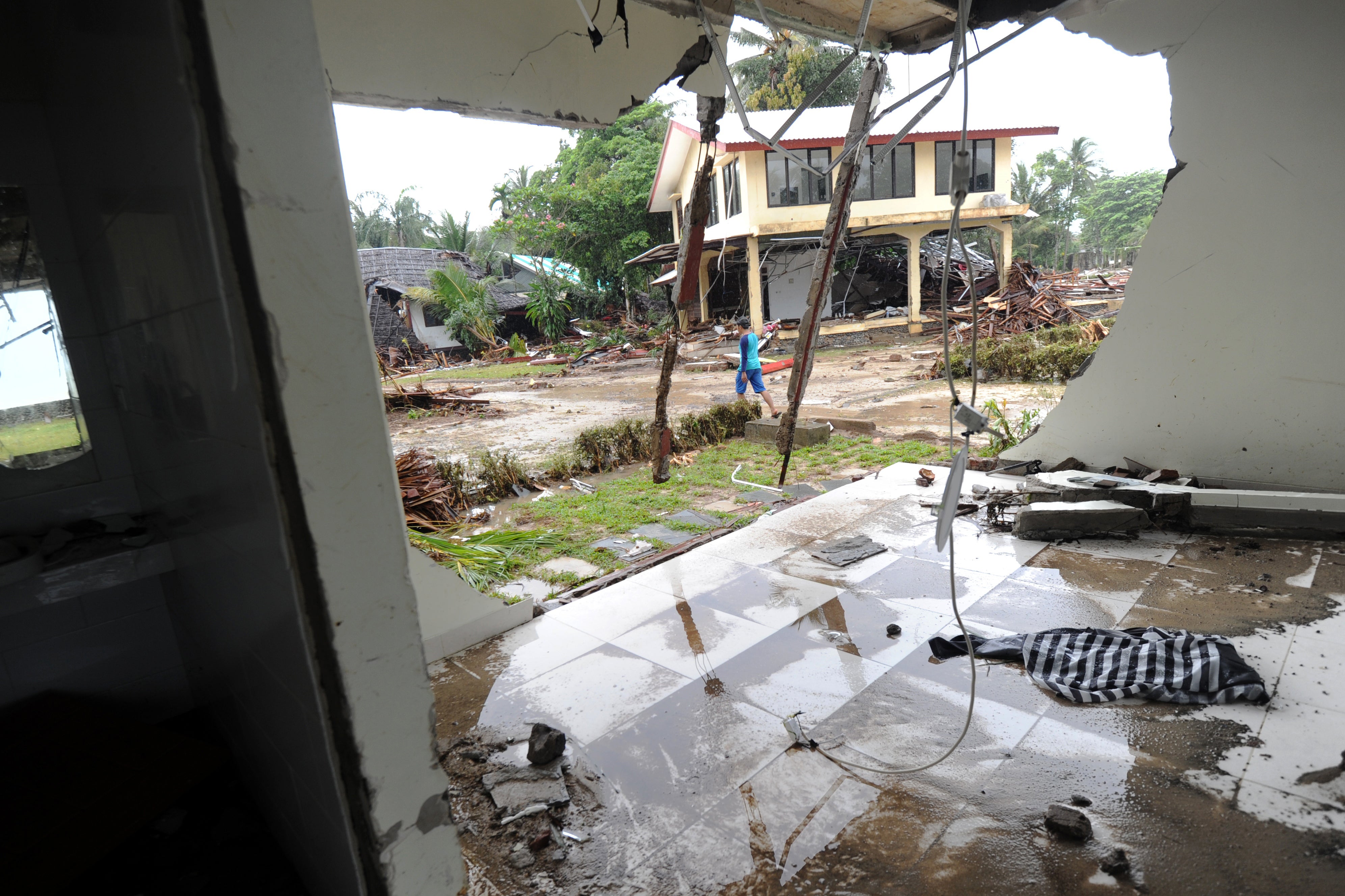 A man walks between damaged buildings at the Mutiara Carita Cottages in Carita in Banten province on December 24, 2018, two days after a tsunami – caused by activity at a volcano known as the “child” of Krakatoa – hit the west coast of Indonesia’s Java island. – The death toll from the volcano-triggered tsunami in Indonesia has risen to 281, with more than 1,000 people injured, the national disaster agency said on December 24, as the desperate search for survivors ramped up. (Photo by SONNY TUMBELAKA / AFP)

PARIS — Another tsunami could strike Indonesia, experts warned on Sunday, a day after more than 200 people were killed by a wave triggered by a volcanic eruption.

What caused the tsunami?

The tsunami “appears to have been caused by an underwater collapse” of part of the Anak (or “child of”) Krakatoa volcano, said David Rothery of The Open University in Britain.

Anak Krakatoa is a new island that emerged around 1928 in the crater left by Krakatoa, whose massive 1883 eruption killed at least 36,000 people.

The volcano has been particularly active since June, noted Jacques-Marie Bardintzeff at the University of Paris-South.

The tsunami that struck on Saturday was the third to hit Indonesia in six months.

Indonesia has 127 active volcanoes and lies on the Pacific Ocean’s “Ring of Fire” where earthquakes and volcanic eruptions are frequent.

Why was it so deadly?

Anak Krakatoa, located in the Sunda Strait between Java and Sumatra islands, is close to densely populated zones.

And while the tsunami was relatively small, Richard Teeuw of the University of Portsmouth in England said: “Such waves — laden with debris — can be deadly for coastal communities, especially if there is no warning.”

Simon Boxall of Southampton University added that the region was also in spring tide, “and it would appear that the wave hit some of the coastal areas at the highest point of this high tide, exacerbating the damage done.”

It also struck at night, further catching people by surprise.

Why were people not warned?

“We were helpless given how sudden” the event took place, Bardintzeff said. “The time between cause and effect was a few dozen minutes, which was too short to warn the population”.

“Even if there had been such a buoy right next to Anak Krakatoa, this is so close to the affected shorelines that warning time would have been minimal given the high speeds at which tsunami waves travel.”

Could more tsunamis be coming?

“The likelihood of further tsunamis in the Sunda Strait will remain high while Anak Krakatoa volcano is going through its current active phase because that might trigger further submarine landslides,” Teeuw said.

Bardintzeff also warned that “we must be wary now that the volcano has been destabilized”.

Teeuw said that sonar surveys would now be needed to map the seafloor around the volcano, but “unfortunately submarine surveys typically take many months to organize and carry out,” he added.

But “devastating tsunami caused by volcanic eruptions are rare; one of the most famous (and deadly) was caused by the eruption of Krakatoa in 1883.”